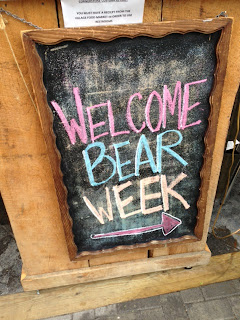 While certainly not intentional, we have stumbled into Maine during Bear Week.

I knew P-town has Bear Week, but did not know that Ogunquit had one, and a week before.

Maybe it's the weather, or maybe the ursa major and minor groups are unaware that this event is going on.  We certainly didn't, but we might be in denial of who is and isn't considered a "bear".

It used to be that broader, hairier, masculine men were bears in my book. Now it is just a description for the morbidly obese and overly hirsute gay male.

At lunch yesterday, the restaurant had brats on the grill for Bear Week. We weren't seated in that area so the waitress said we couldn't participate in the event. Clearly our server didn't think we were bears.

Eventually we did get the brats, and they were marginal at best.

However, the night before I was taken advantage of at a bar.

While just standing around with three other men, my husband included, an older, not very attractive (and possibly inebriated) man decided to approach and lift my shirt to check on how hairy my abdomen.

I politely removed his hand and adjusted my shirt to its original location.

Then it happened again.  And again.  All the while I was being nice but persistent in saying 'no'.

Apparently no doesn't mean no.

....and apparently being accosted in public leaves a group of friends in fits of laughter and finger-pointing.  It's almost understandable how that whole Steubenville rape scenario went down with no willing witnesses and no one talking.  I should be grateful they didn't videotape and post the transgression.

There wasn't enough Purell to get me clean, so I finished my beer and left the bar.

Further indignity?  He was sitting outside the brat place for Bear Week.

The town is too small and Bear Week even smaller.


Song by: Barenaked Ladies
Posted by Blobby at 12:06 AM

uh, that's harassment. call the cops next time. NO ONE should touch you without your consent. and why did 710/friends not tell the drunk to knock it off or else?

That definitely crossed the line. I probably would have confronted him myself if he didn't back off. But then again, that's why I don't do bars anymore.

Once had an experience in Copenhagen in the same direction as yours, though not quite as 'advanced' as you were subject to. But damned annoying it was.

Btw: I've also noticed that today's bears seem to have more (how shall I put it?) 'embonpoint' than heretofore. Glad that it's not just me. I haven't registered the observation anywhere else up to now but now that you've mentioned it......

Oh, and that inebriated chap in Denmark was.....an American. But he could just as easily as been a pissed Brit, or from anywhere else for that matter.

You could be either an "Otter" which is a slim and less hairy bear or you could be a wolf a slim bear that is sexually aggressive.

Also, have you noticed that bears tend to use Woof! as doggie sound instead of Growl or Grrrr? a more bear-like sound?

Welcome to my world--well, not Bear Week exactly, but any crowded bar that includes inebriated men who think their attraction to you gives them license to paw. I avoid "party" bars like the plague unless I have a crowd of friends to fend off unwanted advances.

Why don't exciting accostings like that ever happen to me?? I think you should have appreciated the compliment. ;-)

I totally agree with your statement: "It used to be that broader, hairier, masculine men were bears in my book. Now it is just a description for the morbidly obese and overly hirsute gay male." I thought maybe that was just a southern, Paula Dean butter-filled trend, but apparently not.

And I would have broken the person's finger after the second "no". Or slammed his head into the bar and said he slipped.