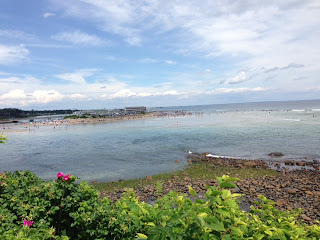 We made it to Ogunquit, Maine for vacation.  This time though we invited Morty, George and Rebecca.

Well, we invited Jon and Meredity too, but scheduling issues and such didn't make that a possibility.  So only Morty, George and Rebecca were able to join us.

This was an idea I've had for a few years - a group vacation for all, as I'm seeing it as a milestone birthday for me.  It's all I wanted.

But one never gets all they want. That is the lay of the land.

Still, we've had fun.  Folks were quick to point out the heat and humidity - myself included - but I tried to temper that with the thought of the winter we just left behind.

The pool was the cool down, as the Atlantic has been 58 F.

Shin deep has been like ice cubes.  I haven't gone in deeper, though I will try later in the week.  However the temps have dropped almost 20 degrees, along with threats of rain - though I don't care about that. It's still a great town with not much to do.  This is not an issue.

Relaxation is what it's all about.  And food.  And drink.  And friendship.

I love we have stories upon stories - some old, some very new, some revealing.

....and last night, in a down pour, we met two really nice female companions who oddly enough, are staying not only at the same place, but in our same building.  FUN!

Oh yes, it's vacation, but I gotta maintain my bikini bod.

Been very hot here in Dallas too. no beaches. :-(

i froze at the 98% humidity comment. Yikes!
I am glad your holiday is a good one.