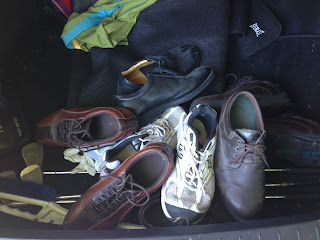 I have to say, ever since we moved back into the renovated bathroom and dressing room, we haven't really moved everything back.

I'm at the point, if it is in another room and we haven't used it, we need to lose it.

One thing that went yesterday were shoes. Not tons - seven pair between 710 and myself.  They were old, out of style or never quite fit.  They've been gathering dust.

It would have been easy to give them too Goodwill, but a local organization was collecting shoes for folks affected by the Haiti earthquake three and one-half years ago.

Haiti is pretty impoverished on its best day, and since that earthquake, they haven't bounced back much at all.  I was good going slightly out of my way to drop of shoes for this charity.

Of course, I think everything's a scam, so hopefully the shoes will make its way to the folks who need them.

I kind of internally chuckled when I opened my trunk with these shoes.  It seemed like I had the Holocaust Museum Shoe Exhibit Starter Kit.

Oh relax - it is a joke.  (Though if you're ever in DC you need to take a day to go to the museum - and then another day to recover.)

But I pulled up to drop off the shoes - one of like five locations - and what do I see? 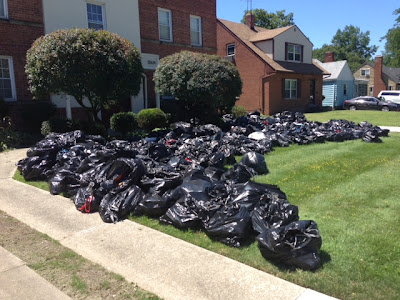 The group has collected over 8600 pairs of shoes!!!  This was only a partial pick-up from one site.  The rest from this site were already loaded into...... 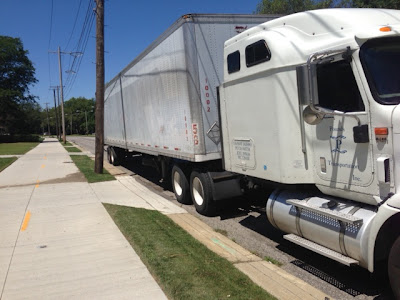 The place I dropped off at was a church, one that has an almost exclusive African-American base. I stood for a few minutes talking to the very handsome pastor who was telling me how he was taking flak from any number of people because he was doing this for Haiti but for not doing something for Trayvon Martin.

I never got to question as to what he was supposed to actually do for someone who had been dead for 18 months (not that I was ever actually going to ask that question).

He immediately went on to say, "people get murdered every single day. These are millions of people who have been without everything for years".

I was a little taken aback by that - not that any of it wasn't untrue - just him being forthright telling someone he's never met before that he was going against some in his congregation with no apologies.

8600 pairs of shoes are nothing to sneeze at. I really have no idea how they'll get tied garbage bags down to the Caribbean.

Here's hoping it's not a scam.

Email ThisBlogThis!Share to TwitterShare to FacebookShare to Pinterest
Labels: Charity

I did get to the holocaust museum whilst I lived in dc. the shoe exhibit is the haunting memory I retain from that tour. the tiny pairs are the saddest of all. :(

FYI. Those dog poop brown lace ups on the right look like are from the orthopedic store and probably have a two inch heel.

Holy Christ I would be bitching up a storm if I lived in that god-forsaken development of identical homes and my dumbass neighbor had seventy-five bags of athlete's foot on his front lawn.

Couldn't part with the high heels and Jimmy Choo's?

Totally agree about the holocaust museum only when I did it with my mom, we could only handle half one day and went back two days later.

Two of the bloggers I read just came back from Haiti (separately, I don't think they even know of each other) and DAN RENZI yes, the one from the real world, is becoming and nurse so he went down. (he does a tremendous amount of volunteer work and is an excellent writer who also now posts on Huffington Post) He posted pics and commented on the number of kids and people with out shoes and the harsh roads they had to walk on. Heartbreaking. I also learned something really interesting from him - a home is only taxed when it is built to completion. So to avoid taxes, most homes are left unfinished.

Oh...good for you and thanks for thinking and doing for others!