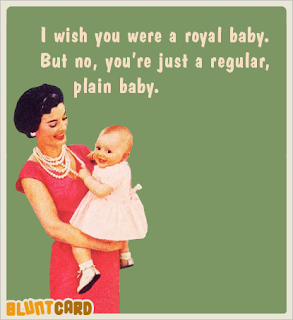 All this fuss over an off-spring.

It's nice and all that the Brits still have a sense of tradition and well - adhere to the class system.

All in all, I'd rather hear about the royal baby than not be able to turn on a tv or open a newspaper to hear or see every pregnant second of Kim Kardashian's bastard.  Sadly, she might be America's royalty.

How far we've fallen as a nation.

"How Long Will Kate Keep Us Waiting?"

Excuse me?  How is this fucking about you / me / us? Sorry she's not on your timeline or told you the exact due date, you vultures.

And this is a U.S. CNN headline, not CNN International. This isn't even the BBC where, you know, the birth of a monarch, actually means something.

While we were in Maine, I kind of hoped that the royal baby watch was all over. Morty said something about it, off the cuff, (he's not obsessed with it.....honest!), and it made me assume that labour had begun.  Alas, it was not meant to be.

My lord, the blog entries and comments, the Facebook posts - and the parodies - about the birth, about the baby, the parents, etc, you'd think people wouldn't have time to pull away from their Rolling Stone cover rants to join in on the baby news.  Alas, they found the window in their busy schedule.

Praise be that it's all over.  Yes, we'll have to see picture of his first day at school and shit, but I'll be long dead well before he ever takes the throne, assuming there is a monarchy at that point.

There are allegedly 3.6M babies born in the world every single day.  The amount of time and effort for this one is just strange to me. The ones who struggle to succeed are the interesting stories.  Not to diss the future king of England, but c'mon, he's going to struggle for very little.

I look at it this way - the story got George Zimmerman off the front pages, and Anthony Weiner is knocking the little baby king off his rotation.

Lord knows what is next.

If you're complaining about the media coverage just spare a thought about us poor Brits where all the main channels here have gone crazily O.T.T. with this one. There are some of us who don't care a fig for the story, but rather want to hear some real NEWS!

(Better not say any more as my last blog on the royals ended up with me getting a considerable amount of egg on my face.)

I really would love to care more about the royal baby, but well, we fought a war so that we wouldn't have to care about royal births. Of course, I think that most royal families are just not worth getting into a fuss over, benevolent rulers or not.

You said: "but I'll be long dead well before he ever takes the throne, assuming there is a monarchy at that point."

You know, I just thinking just that the other day, and pretty sure that I won't even see King William. Now King Charles, I was counting on, but the Queen seems to plan to rule forever . . . so I don't know anymore! LOL

But I love all things Royal!!

And here you are, wasting precious blog ink about it! Less royal fetus, more Petey!