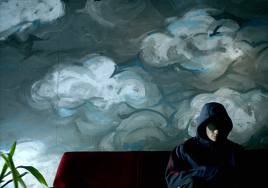 While we are still behind on our movie going venture for the year, over the weekend we notched another one on the belt.

Honestly, I haven't been paying too much attention to movies, though there are previews of coming attractions that makes me stupidly think that we can make the goal of 12 movies in a year.

But since I haven't been paying too much attention, I certainly did not hear of the movie / documentary (?) Imposter.

The premise presented to me made it sound like the true-life story would be told taking you through the events or a missing and seemingly found child and letting you know the outcome as the movie progressed.

You know from the first 120 seconds if the man is real or well, the title of the movie.  There! There's your 'spoiler alert'.

Since this is a film from A&E, you'll expect to see it on cable as a documentary there, but we paid full price to see it in a theater. Everyone seemed to like more than I did. I found the first 30-40 minutes to move too slowly and the edits were too crappy for me.

After this Texas family of the missing kid became more involved, the weirder it got. That whole 'truth is stranger than fiction' applies here.

Yet, I was unsatisfied. Too many questions, too few answers - a weird, non-assigned / non-paid private investigator and an FBI agent who doesn't seemingly have a clue and missing the most basic things - like, oh say, eye colour!

Song by: Bruce Springsteen
Posted by Blobby at 6:44 AM

Not sure if you saw my review of this film a few days ago, Blobby:-

Suffice to say that I liked it - quite a bit, in fact. But there's 'taste' for you!

I haven't seen it yet but I hope to. It is playing at the local 'art house'.

All the reviews I've seen have been somewhere between 'Good' and 'Raves'. Always good to hear both sides. Always a matter of taste.

I saw a production of Henry V this summer which I did not care for. Everyone I know who saw it loved it and the NY Times critic raved about it....didn't work for me though.

I went and saw Queen of Versailles yesterday. Meh. True story but it really is nauseating to hear filthy rich people whine. I guess that was the point though.