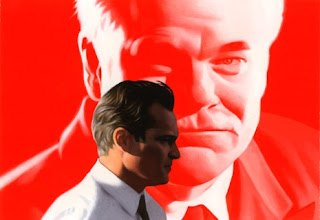 ....well, that last part might be a slight fib.

Yes, we're still behind in our yearly movie-going quest (but now only by one), but not only did we rub another one out....um....check another one off, but possibly the first true "Oscar contender" of the season: The Master.

Let me start out by saying, that I'm not saying this flick is Oscar worthy, the "press" has deemed it so, and well before it was released. Or the movie's distributor has a great PR person (and no, I don't mean a Shark....or is it a Jet(?)).

Like most movies I want to see, I opt to not read reviews of them prior to putting my tush in a movie seat. And while I haven't read a single review, one hears things. "Philip Seymour Hoffman is great".  "Joaquin Phoenix's role of a lifetime" (I'm paraphrasing.)  Yada yada yada.

They are both good in their roles, but I'm only assuming Phoenix is acting half the time, and the rest is just this basic weirdness. Maybe that is his craft - hard to say.  Seymour Hoffman seemed to be better and more captivating.

...well....as captivating as this movie can be.

I can't say I enjoyed it. I can't say I saw where the movie was going, or where it went or why it went there. Clearly, I am not intellectual enough to see beyond what they present on the screen.  It was two and one half hours long and seemed longer.

Not a Spoiler Alert, but the movie is "allegedly" about the formation of Scientology, though director/writer Paul Thomas Anderson won't really confirm that, as he'd have his ass sued by Kirsty Alley, John Ravolta and little Tommy Cruise.

The irony is not lost on me that Cruise starred in Anderson's Magnolia.  I wasn't thrilled by that either - except for Aimee Mann's soundtrack.

I am sure I'm missing things on the artsy level and perhaps the fartsy one too. The movie had no insight or revelations - I don't care what reviewers who have their heads up their ass think. I suppose unanswered questions are supposed to be fulfilling in the movie community, but personally I think the creators write themselves into a corner and can't figure out how to end a story. Or maybe even tell it.

I don't think every story or movie needs to be wrapped up in a pretty little bow, but I think the bow should exist, whether it is tied or not.

I think what little press I've seen about this movie is overboard....not the Goldie Hawn / Kurt Russell vehicle.  That would have been welcome.

In a way it was ok to see Laura Dern in something, but am I missing the boat on Ilsa Fisher Amy Adams?  She has one acting affect that I can tell, and sure you can have her read dirty words or jack-off a main character, but she still has no range.

Sure, if and when Mike re-challenges me to a do-over for the Oscar picks, I might pick Phoenix or Hoffman - not because I think they deserve the win, but that others will. And I'm willing to compromise what little integrity I have to win.

You can go see The Master, but you'll have two outcomes:  my "I Told You So" moment, or your ability to educate me on what the fuck I missed with this one.

Song by: Depeche Mode
Posted by Blobby at 5:47 AM

I heard it was over the top

Thanks for the heads up. I will now avoid.