I haven't really been watching the Democratic convention that much. I know I should, but I just don't seem that invested in speeches to nominate the only Democratic candidate. Yes, the speeches are inspiring and hopefully there will be a bump for Barack in the polls.

But today I'm sick. I'm stuffed up, my sinuses hurt and my teeth are starting to ache.  Not good signs.

So I'm not up for being clever, funny, political or opinionated today. But I can't leave ya hangin' now, can I?

I guess that's a good thing about having a doggie. Doggie pictures.

Oh, Petey apparently has a girlfriend - so says the neighborhood chatter.  He's no longer the newest pooch in the 'hood.  Esmé is a Great Dane rescue and just one the calmest and nicest dogs on the block. We see her on our morning and early evening walks and they just get along.  However, our neighbors tell me "I hear Petey has a girlfriend...."  Oh, how people will talk.

I'm assuming Esmé is named from the J.D. Salinger short story "For Esmé - With Love and Squalor" fron his book (one of my favourites) Nine Stories.  I'll have to ask if they renamed her or if they stuck with the name she had previously.

I'd never want a Great Dane, but she is so pretty and so well mannered. I just don't want to pick up those size poops. And my lord, at least they didn't name her Ophelia....so that's a plus. 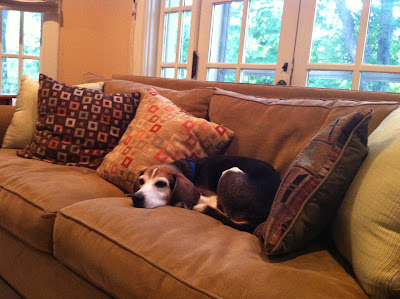 He's not supposed to be on the couch. But he was so cute, I let him stay there until we heard 710 come home. Every once in a while we come home and the pillows are on the floor.  I'm not sure how that happens. 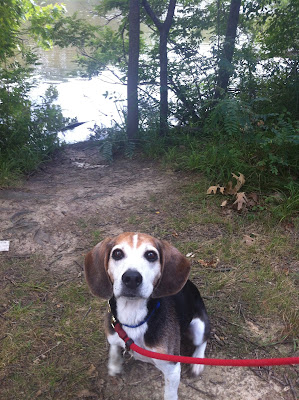 We take him up to the Shaker Lakes just to get him out of the 'hood and to get him in a car that doesn't only take him to vet or kennel. 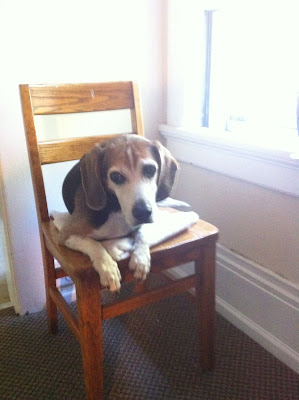 In my office, Petey likes to look out the window at his big tree, but hates the wood chair, so I lift him up on it and he'll stay for a while.  We need a better solution. 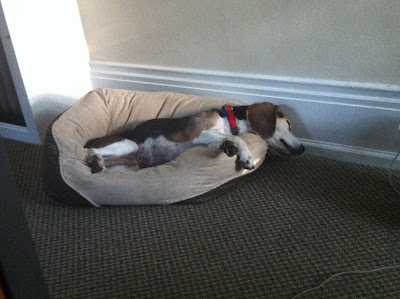 When he goes out, he goes out hard. He snores and wheezes just like 710, Sophie and myself. 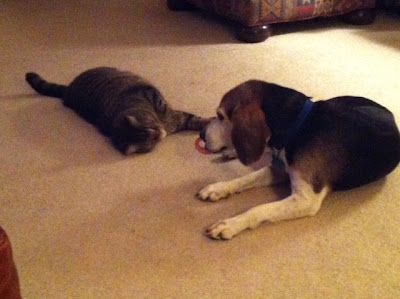 Sophie is getting more and more comfortable with Petey. He is almost never out of her sights when he's in the house. I'd like to say she'd end up sleeping with him, but all his Old Man noises still make her keep her distance a bit. 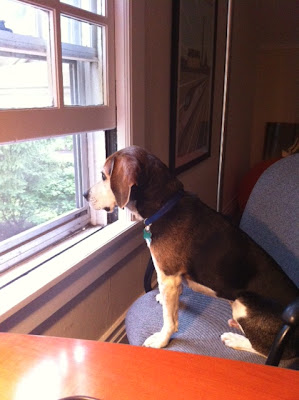 Another window; another chair. He likes the fabric on here, but the chair has wheels, so that doesn't work either. But it's a different view for two other trees. He's rarely in my office anymore - he loves loves loves being outside - up to 12 hours per day. That will change in Winter, I'm sure.


So that's it  That's what I got. Hopefully my head won't explode in the next day or so.

He looks so happy - what a lucky li'l guy.

Mine camp out in what ever window they can.

Pet pictures are always welcome. I won't let Harper see the one on the couch lest she get ideas.

You take great pictures. It doesn't hurt to have such photogenic subjects. Anytime you run out of ideas, a pet post is always welcome!

Such a pretty pooch!
I am glad you have such a lovely dog.

It all comes down to poop.

I bet she's named - I'm sorry -- for the twilight character.