The Way I Choose 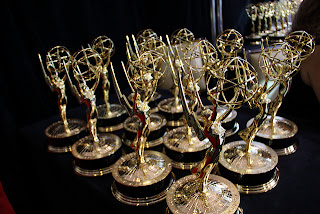 That's all you can call my selections. But isn't that true of anybody playing this game?

Granted, I watch more TV than I see movies, but I can't say I watch most of the TV that is represented here.

On many of these categories, I'm either going by word of mouth, or my own hopes that someone I like and watch wins.  ....and sometimes, I just pick someone I hope doesn't win!

So there is a mix here of me picking people I want to win and me wanting to beat Mike (or anyone else who wants to play along - and I hope you do), so I'll pick something I've never seen (Homeland, Breaking Bad, American Horror Story) because the press is all over that shit.   ...and I'm nothing if not a conformer.

I've never seen Homeland or Breaking Bad, but I "hear" they are the best shows on TV.  Making meth / dying of cancer or a drug-addled Angela Chase tracking down a suspected terrorist doesn't seem that engaging to me (oh, and we don't have Showtime for that show).

I have seen Veep, Downton Abbey, Modern Family and Game Change.  Who knew that I'd ever think Woody Harrelson  should win anything, but he did an great job, but clearly not as good as Julianne Moore. And while Modern Family is a powerhouse, I wouldn't really bet against, there are some acting roles that I think were just as strong (I mean, I love "Schmidt" on New Girl. He's one of the best characters on TV).

As for writing and directing - it's a total crapshoot. They either don't say which episode it is, or the title they give you means absolutely nothing to me. I'm totally making those up as I go (though I did know the Community episode for comedy writing, which is why it got my pick).

Mike (he's gay! going by the homo by-laws, isn't he required to be called "Michael"?) told me about the Creative Art Emmys and that four of the original categories were broadcast this last weekend. I removed those (as did he).  For the record, I won two and lost two on those.....but they don't count now.

So to recap by colour:
Red means: will win.
Blue means: I think should win.
Green means: should and will win.

For competition purposes, only Red and Green count towards a victor..