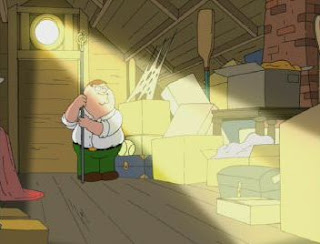 I'm never sure if these types of films count for my yearly goal of seeing 12 movies in a theater per year, but over the weekend, we went to go see Indiana Jones and the Raiders of the Lost Ark.

That asswipe, George Lucas, ended up rebranding it with the "Indiana Jones and the..." part after he started putting out shittier and shittier prequels and sequels to the original film.

31 years after it's original release, for a very limited time (one week?) Raiders is back in the theater (in IMAX), mostly to promote it being released on Blu-Ray.

Raiders is one of those movies I never ever tire of seeing. ...and I've seen it........a lot! Possibly in the triple digits?

Back in '81, my mother, ever annoyed with me, kicked me out of the house since I was so painful to be around (according to her). I went to see Raiders, knowing almost nothing about it.  Since clearly, I wasn't old enough to know these adventure type movies from the '30s, this kind of serial was new to me. Action, Drama, Romance, Humour, Nazis - all in 100 minutes. It had it all!

I'm not sure how many of you saw the first Transporter movie, but close to the end of that film, there is a segment with the transporter doing what is so close to a scene-for-scene car driving stunt that I'm not sure how it wasn't lifted right from the Raiders film.

At this point, I have no idea exactly how many times I've seen Raiders - on the screen or tv. It was the first movie I owned on video tape...........and that tape was a Betamax!!!!  (I'll wait while you youngsters, or dementia prone folks (Mike) Goooogle that). Either way, I'm sure I'm over the 100 mark for viewings.

As mentioned, the one prequel and two sequels are horrid, fair and poor, respectively. In the original, Lucas told a decent story and Spielberg did his thing - and let's face it, at this point and time, it was "his thing".

More than I realized at the time, or even after, Spielberg set stuff up so similarly in his movies of this era. Sounds emanating from the ark were the same/similar that came from the big UFO scene in Close Encounters. The altar scene in Raiders had a very similar quality of the staging area on the other side of Devil's Mountain in Close Encounters. And there were a number of Poltergeist elements as well. But I don't think it's illegal to plagiarize yourself. Maybe the Nazi element was just a set-up for Schindler's List.  Nahhhh.

Save a few special effects at the end of the movie that even 30 years ago were weak and now even more so - but you can kind of overlook them.

My movie-going companions seemed to chuckle their way through it which kind of irked me. Yes, Karen Allen was kind of whiny. Yes, the story was implausible (yet they really want to see the new James Bond - since that is set hyper-reality!). They'd all seen it before, so what's with the laughs?

But I'm not sure Harrison Ford has looked better.

Oh, and I've decided to include this in my movie going total - so we only have five more to go.

Song by: Counting Crows
Posted by Blobby at 6:27 AM

If you are sitting in a seat you had to pay for, the only food legally available to you is grossly overprice and bad for your health, the screen is over ten feet and you don't have control over the machine projecting the images you are watching then I say that counts as a movie. Oh through in screaming brats, gabby teenagers and smartphone screens lighting up the joint just for good measure and atmosphere.

One of my favorite movies of all time. I blame the father unit for that, actually. He also made me love "Blazing Saddles" too.

When I change a patient's medication, I often refer to the opening seen in Raiders, where Mr. Jones is trying to fill a bag of sand to sub for the golden idol. Happily,this movie is so well known patients 'get it' right away.

I'll forgive and forget (literally) that snarky comment about my dementia.

And i'll forgive you for loving this movie so much, as long as you'll accept my love for DIE HARD and XANADU. Smoke on your pipe and put that in.

I agree with Sean. If it was an in-theater experience it counts, even though the commercials are now the same as the ones on tv.

Betamax! I had one of those too.

Raiders definitely had that perfect "adventure comicbook" feel to it. Right down to the camera angles and lighting.