710 came across and article online that probably only we would care about.

The Wonder Bread factory in Columbus is being turned into condos....well and restaurant space.

710 and I started our second living together "situation" across the street from Wonder Bread back in 1993, under the neon sign that more often  than not read "Wonder Brad" or "Wonder Bad".

But all throughout the day, we had the smell of freshly baked bread. 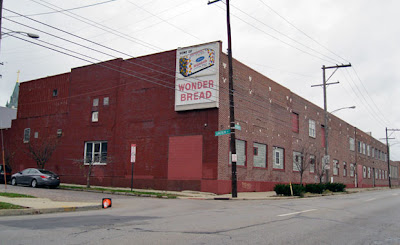 It was an ok townhouse, nothing fancy, but we had a backyard. And we got Tovah while we lived there. Our PWT neighbors spray painted 'FAC' on the bumper of my car.  I'm not sure if they were scared off before they finished, or if it was just an indictment of the American education system.

Still, it was a nice place to start over and from there we migrated north to Cleveland two and one half years later.

While the street (on the other side of the building you see in the image) was a quiet tree-lined brick one, I wouldn't fancy living with lofts and patrons coming and going all evening.  Still it's nice they aren't letting a vacant building just languish.

Song by: Nat'le Merchant
Posted by Blobby at 6:45 AM

When I was in college we used to park in front of the Wonder Bread factory in Detroit to go to Tiger's games. It is now the Motor City Casion....at least it was when I left Michigan a few years ago....and they did not keep the sign.

Mmm... the smell of fresh baked bread. Growing up near Orlando, we'd go visit our grandmother and pass what I think was a Merita bread factory. It always smelled so wonderful.

Oh sad! But wouldn't it be a great place to live, hmmmmm????

Ah, gentrification. It's a nice idea to build the condos closer to downtown, but do they have decent services yet? The only good thing about COTA was that I never had to pay for it.