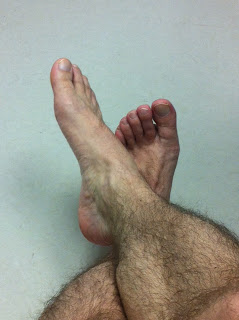 I had my doc appointment yesterday and there were no surprises:  labs good. health good. we agreed on a colonoscopy in 1.5 years. He prefers to have them done in summer, as you can chill the prep drinks that you'll eventually poop out...and it's easier to drink chilled mag-citrate during warm months.

But he asked about other stuff going on and I mentioned my food pain. I'll give him this, in a matter of minutes he had an orthopod on the phone and I was headed to radiology to get my feet and then foot x-rayed.

They use lasers or something to line up the shot just right. How cool is that.  I had to hold a lead sack over my junk as to not absorb more radiation.  Did they not know I also had to take a pic? 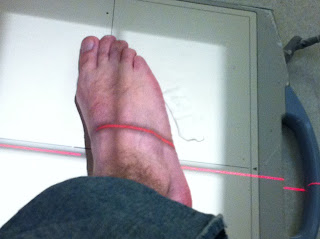 Eh - it's not like I was going to have kids anyway. And it's not like there was enough radiation in those three x-rays to do damage.  The bigger threat was the front desk staff who couldn't seem to check me in.

Then it was off to orthopedics.  Mind you, it was my most pain-free day, so I don't think they could get a grasp of what I was trying to tell them could drive me almost to tears and I'm never good at describing pain.

I left with a few things: one being a pair of orthotic inserts for my shoes. 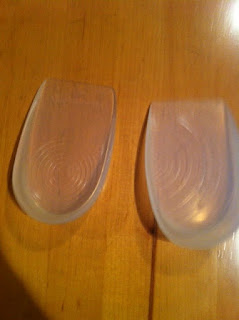 The left one holds little purpose. The right one, which is more opaque has a very steep slant from right to left, which you can almost see by the cloudiness of the rubber in the picture, with the right being the thickest part of the insert.  710 says it will make me taller - these lifts.

The other thing I left with was for an appointment to get a mold of my foot to make a custom pair of orthotic inserts.  After that, it will take 4-6 weeks to come in.

I also have a possible explanation for my perpetually dry feet:  athlete's foot.  It doesn't itch - there is seemingly no fungus, unless that manifests itself in dry / cracked skin.  Either way, I'll be using an anti-fungal to see if that helps.  And I'll be buying a pair of shower shoes for the gym. Ugh - one more thing to pack.

You knew what you signed-up for when you opted to read this blog.  Suck it up.

Song by: Bruce Springsteen
Posted by Blobby at 7:01 AM

spouse has worn orthotics for years (his right leg is 1/2 inch shorter than his left leg).

I will have my annual next week. I'm guessing it won't be especially good. Nice leg shot. :)

I have worn inserts for 14 years now. You will never see me in thongs or flip-flops whatever they're called these days.

I've worn custom orthotics since I was in 8th grade. It's actually been a little while since I've worn them though, as they don't fit in my Chucks. And I sit on my ass most of the day.

I hope your feet aren't ticklish at all. It's all I could do to sit still when they're putting the casting material on my feet.

I read blogs to hear about just this thing; I want to know what my blogger buddies are doing and what they are going through.