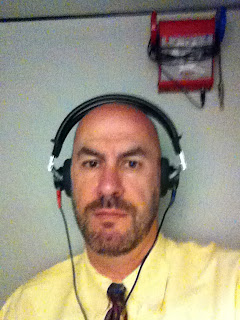 I am the audio-impaired equivalent of Mary on Little House on the Prairie....or something.

I awoke yesterday morning feeling ok. The night before I had some post nasal drip, but nothing bad by any means. I had no pain, I had no discomfort.  I had no nothing.  ....including the ability to hear from my left ear.

This I found out when my phone rang. I'm a leftie and raised my phone to my left ear to hear absolutely nothing. But you know how you also get that, for lack of better phrase, tunnel effect where noise, and even lack of it bounces of your ear drum - so you know everything works?  I didn't have that. It was more like any sound or white noise absorbed there, going nowhere.

That's not a great explanation, but I have no other good way of phrasing it.

Holding the phone to my right ear, everything seemingly worked well. I didn't panic or anything. I figured something from the flight the day before, or that post nasal drip. Normally there is pain associated with either of those things - oh and no real hearing loss. Well, one time there was loss, but both my ear drums burst when descending into Key West.

Off to the shower I went, but when turning off the water, I noticed continual ringing in my ear. Bummer. That continued for maybe an hour.

Then I picked up a doc who works for me at the airport and told him of my problem. He said he'd check me over when we go to our clinic site.  ....and he did.

Oh, I should mention that last Friday, I did that thing where I whack the top of my head on some door frame. It left a very little, but very painful, contusion on my noggin. I thought nothing of it...well in this scheme of things.  No worries, he ruled out any connection considering the timing of the events.

But both ears looked good. No blockage. No inflammation. No nothing.  Admittedly, this is when I became a little more concerned.

Stepping in the audiometry booth did nothing for said concerns. I sat for 10-15 minutes going through a series of beeps that I heard or think I heard.  And some I apparently did not year at all. 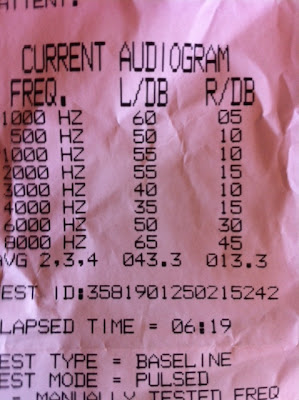 Because I know you all wanted to see my results, there they are: left ear and right.  Allegedly, anything over a 25 is bad.  Clearly, nothing on the left is under a 35 - and goes all the way to 65.  I think Marlee Matlin hears better than I do.

As the course of the day ran on, I found myself situating where I sat and stood so I could see faces and do my internal Julie Brown impersonation ("so I leaned down and said...in her good ear...Debbie, why'd ya do it??")...I mean, stand to the left of folks so I could hear from my right side.

A few times during the day, the constant ringing came back - so I guess there is some sound, right?

The doc had no real words of wisdom for me. He suggested maybe my Eustachian tubes, which would make sense, as that is how my ear drums burst before - yet there is that lack of pain, redness or swelling.

His parting words when being dropped back at the airport, if it isn't better by the time I land tomorrow night (yayy....the thought of the take off and landing in a plane with a bad ear excites me to no end!), then I should see an ENT in short order.

So the irony is, my father, who is stone deaf and refuses to admit it or do anything about it - and the son, half his age, will have one more thing in common, though I won't forgo getting a hearing aid when the time comes - and I'm not saying that time is now.

710 provided little support and less empathy. "Oh, I had that".  Whatever. He asked, "how will you ever hear your kitty purr". I suppose I will feel her, so will sense the rumble....a sort of Feline Braille.

I'm guessing / hoping this will indeed pass.  It wasn't gradual, so it doesn't seem probable that will be long term, as it wasn't trauma induced.

I guess we'll see.  And my sight will be better as those other senses will now become heightened.

Song by: Maria McKee
Posted by Blobby at 6:21 AM

You make it sound normal to whack into door frames. Just how tall are you?

This may be just an annoyance, but the prospect of permanence can be disturbing. Be well, sweetie.

I guess My Music Mondays are all mine now....

Please tell me you've found an ENT and visited already.