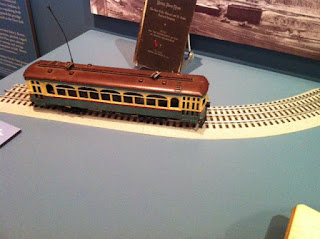 No, you can't ignore the train.  Especially when you're dragged invited to the Shaker Historical Society who was having a seminar on the Rapid Through the Years.

The Rapid transit is basically our heavier than light rail, but not quite a full-blown train.

First, let me go back 20 years (?). A few of us attended our friend Daphne's graduation from nursing school.

Or so I thought - until I encountered the speaker for the Rapid.  OMG - I wanted to stick needles in my ears.  An hour seemed like four.

The Rapid was not just transportation, but there were socio-economic implications to implementing such a rail system - some of it was intended to bring the 'help' out to the Shaker area, and yes, the express business cars were all 'white'.

None of these things were touched on.  The subject matter 'expert' knew about the trains. The cars. The types of cars. The color of cars. The number of stripes on the cars. Where the doors on the cars were placed. The width of the wheels   ....the.......you get it.

Of the 50 or so folks there, I was the fourth youngest......well, I estimated. If some of the others were younger, they've had harder lives. But I felt for the octogenarians, as those folding metal chairs were hell on my back, I can only image what it felt on their arthritic and osteoporotic bones.

Next week's lecture is on Paul Newman - who was from Shaker. I won't be springing $5 for that discussion.

Ruckiry (not Jon's boss), after this talk it was off for tequila Mexican food. So the day wasn't a total loss.
Posted by Blobby at 6:55 AM

Sounds like my childhood friend, David. He was and *is* train-crazy. He knows the North American Amtrack schedules almost by heart.

Shaker Heights celebrates turning 100 this year. It sounds like this lecture lasted that long for you. The community is unique and still vibrant,but tied to tradition. That said, the rapid is the reason I would not live anywhere else in NE Ohio. Three blocks from home to the Tribe,Cavs,Browns and airport. Where else can you get that?