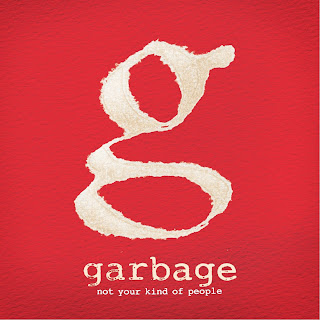 Believe it or not, I have not done a Record of the Month since February. There has been nothing out there worth purchasing. There are a bunch of albums slated for release in the upcoming months, so I'm jazzed about that.

One of the disks I've been waiting for - for about six years - is the new disk from Garbage: not your kind of people.

Like an iTunes junkie, I once again bought the deluxe version - 15 songs as opposed to 11 on the regular version.

The sound is new but not new - such is the beauty of Garbage.

Each of their disks is slightly different but has a familiar vibe that go through all five of their recordings.  NYKOP (you don't think I'm gonna write that title out each time I use it, do you?) has a modern day sound and still sounds like they took some pointers from Blondie's 1977 disk,  Plastic Letters .  This is not a bad thing.

I don't know that this disk is better than their last one, Bleed Like Me, but I find it way more appealing than Version 2.0 and even better than or even Beautiful Garbage.

I am digging "Man on a Wire" - it is totally rocking.  Totally meant to be played LOUD (well, when I could still hear........no worries, I'm going to an ENT tomorrow).  Same can be said for "Automatic Systematic Habit".  I am loving that too.

"Sugar" has a nice ethereal feel to it.   You want a dance-like tune?  Try "I Hate Love".  If radio still played groups like Garbage, it would make a really good single.....which is more than I can say for their first radio release, "Blood Like Poppies" - I'm not digging it - at all.  It kind of has all the right elements, but it is not firing on any cylinder for me.   ...and "Felt" feels like something off their first disk. Not a bad thing, just a little too similar.

As for the four bonus tracks, they don't seem so bonus.  That is a good thing. Most extra tracks are total throwaways that you end up wishing you didn't spend the extra dough to get them.  But "The One" and "What Girls are Made Of".  "Show Me" is good.  "Bright Tonight" sounds a little too much in the vein of "Sugar", which was done much better.

Still  with NYKOP, Garbage releases a more than solid disk, which is great. Unfortunately, music trends have moved on in the 7-8 years since their last release - and even back then the industry was leaning towards marginal individual artists who have little to no talent and penchant for auto-tune.

I'm glad to see they can buck that trend while still doing something "old"....and do it with talent.
Posted by Blobby at 7:00 AM

Their new single sounds just like an old Kaiser Chiefs song, that was also remade by Lily Allen.

I bet Garbage, their manager, their accountant would rather...

My real comment is on buying habit. While I've been able to transition to online downloads over CD's, I still want the entire album and not just one song. On the flip side of that, like you, I'll usually buy the deluxe version on iTunes vs never buying the deluxe version in the store.

For a minute I thought you had blogged about google.