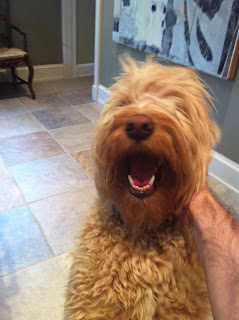 This is Calli.  She is a Wheaten terrier.  ...and she needs so much love and attention.  ...and she's soooooooooo cute.

Calli and her brother belong to our neighbors.  You might remember me talking about our friend Bill passing away almost two months ago.  Bill was one of their dads.

So as starved for attention as Calli was before, it seems more so now. Same with Tully. Tully was more Bill's dog and he seems a bit lost now without him at home.

But with Marty traveling for work, now and again he needs someone to walk the dogs.  I am one of those someones. I can only be one of them, because clearly I travel for work and am not always around when they might need to go out.

So far the number of times I've actually walked them is zero. But I'm at the ready.

This is good practice if we ever get a dog - and now and again we've been thinking of it more and more.

710 and I were taking an evening constitutional last week and just kept running into others doing the same thing. Except the others all had dogs.

There are two kinds of folks in the 'hood who know each other - and one is the dog group and one isn't. I'm not sure the two mix so well.  Then there is me, who'll stop and get down and play with the dogs and let them jump and lick and nip at me.

......which is one reason 710 is hesitant to get a pooch.  I'm not big on obedience except when it comes to where they pee/poop and feeding them.  Everything else is fair game.

I like happy dogs - and doesn't Calli look happy?  Bill used to call her "Spawn of Satan", but she was just a puppy.  Apparently she like to eat their curtains.  Pfffft.  Big deal.  I can say that because they were not my curtains. Cuteness lets you get away with a lot!

I'm looking forward to my dog walking, because on that evening constitutional, one of the folks we ran into jokingly (????) said, "you can't be out here without a dog". But it is great that if people don't know neighbors by sight or name, you say, "they have the two standard poodles, Louis and Frankie" and the other person knowingly says "ohhhhhhh, right, I know them".

Because, seven years in we still live in the "Thompson house" (the previous owners).  I suppose when / if we ever leave the new owners will live in the Blobby and 710 house. At least if we get a dog, people who only kind of know us, would at at least know us by our dog's name.  .....and higher praise could not be had than to be identified by that.

Song by: Laurie Anderson
Posted by Blobby at 7:29 AM

My dad's newfie passed away a year ago. He should get another dog but he's hesitant. However, he LOVES wheaton terriers.

how would sophie react to a doggie in your house?

It's so true. People come to recognize and remember you by your dog (s) more so then by you.

Guilty. There is a very kind couple in the next block. I have been introduced to them a couple of times, but all I can remember is they are Penny the Pug's mom and dad.

I very much recommending getting a dog. Such a joy to have.

And this is the reason I name my pets horrifically long or terrible names, like "Slartibartfast" or "Satan". Just to frak with people.