Naked to the Eye 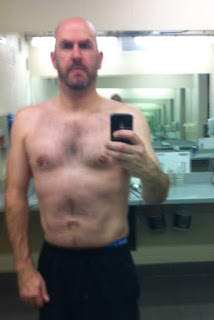 People's behaviour in the gym shower is just interesting.  Not always in a good way, mind you, but it makes me chuckle to a degree.

There are the guys who swing to and fro, nekkid as the day they were born going from locker to shower and back again. I might be one of these guys. Not because I have to show-off, mostly because those towels aren't built for a waist like mine. Sure, that towel will wrap around and tuck-in, until I take two steps, then all is lost.

Since it is all of 45 steps from shower to my locker, why even bother?  No worries, I can strategically place a towel in front of me while taking my stroll.

But there are the guys who go nekkid as in a show-off manner. Or seemingly. Maybe they just have a better body image and exude more confidence.

I'm not that guy.

Of course, there are the guys who are shyer but like to "look" at guys. If they exist, most are covert about it. I'm assuming. But there are those few guys who really have no shame. They exist in every locker room.

One guy stands out for me. Two really.

One at the old Larkins Hall at Ohio State. He did nothing but sit in the sauna and "stretch"- right on the floor of the sauna - as if he ever worked out, let alone warmed up, a day in his life. Anyone who ever worked out there knew of this guy - no matter what time you went to the gym. It was creepy. You'd think with all the time he spent in the sauna he'd have sweat away his fat, even if he never lifted a weight. But no, he was portly. ....and I'm being nice.

The second guy is at my current gym. I don't know him, but I know he's gay. That's fine. But he looks a tad bit creepy....and he looks at me.  The other day, he made a beeline to the locker room and shower when he thought I was headed that way.  I wasn't. I mean, I went to shave my head before I showered, so he was done before I went to bathe.  Crisis averted.

Ruckiry (not Jon's boss), I only run into him every few Saturdays, depending on what time I get my fat ass to the gym.

Last Saturday though, I came across a new one. The guy had two towels.  One wrapped around his waist, one he carried.  He came to the shower area, hung one towel up and kept the towel....for the entire time.  Face towards the wall (we don't have individual shower stalls), he washed what he could, and might have opened his towel, washed and closed back up.

But from a physics perspective, I was perplexed. When my towel is bone dry (hehehehe....I said 'bone'), it doesn't stay on. Add 20lbs of water absorbing directly into said towel, all the while more is cascading onto it, how does it stay on??

After he turned off the water, he walked over to his non-wet towel, dried off what he could and then wrapped dry towel over the wet one then dropped the wet towel from underneath.  Pretty sneaky sis!

Of course my first thought was:  'why bother? Shower at home.'

Actually that was my second thought.  My first thought was a clip from Scrubs from years ago....that always made me laugh.


Song by:  Mary Chapin Carpenter
Posted by Blobby at 6:18 AM

Email ThisBlogThis!Share to TwitterShare to FacebookShare to Pinterest
Labels: Gym

At the previous gym I went to, each shower had it's own little stall AND vestibule (for a lack of better description). So you never even had to be seen outside of your clothing. I liked that.

The current gym, not so much. So now when I go to the gym, if I can get away with not changing there or showering there, I do. Which is probably why I just don't go like I should. All because I don't like to be naked.

The lack of individual shower stalls is something I wouldn't put up with. I'm wondering, did you know that before you signed up at that gym, or did you only find out afterwards? And would it have made a difference?

Clearly the modest one at your gym is a repressed homo who only does the towel trick to hide his raging boner. Just throw a bar of soap in front of him and ask him to pick it up for you. He'll probably shoot all over himself.

I like peekers. If anyone wants to peek at me, that's fine. However I know there is no doubt they are either really hard up or legally blind.

Hehe... I am not scared about nudity... we are all born naked.

Seems like excessive modesty. Feel badly for someone that nervous about public showering, I'm sure that's got to be tough. Personally, I prefer to shower at home. I like the space and using my own product (yup - I'm that gay)... It helps that I work from home and my gym is across the street.

I have no problem being naked. But I also don't 'parade' around naked either. But I know a lot of men that have all kinds of body issues that just seem weird to me.

in my gyms there seems to be an unwritten code of 'cover up as much as possible' with many men literally putting up and down their undergarments and pants underneath their towels, so there is never any exposure at all. Mormon thing, I wonder ?

I always go home, the sauna stories scare me

Here is something I don't understand: Why would someone take a perfectly clean towel and wrap it around a sweaty body on one's way to the shower only to be drying one's freshly washed body with a sweaty towel?

I walk to the shower unwrapped, but return post-shower to my locker wrapped.