I almost let the month slide without an App of the Month.

I can't believe I haven't done a travel app.  I think the reason I haven't is because most of them suck.  Delta's is sub-par, last time I checked UScare didn't even have one.  Southwest I have, but it's fair at best.

When it comes to air travel United, by far, has the best iPhone application. To be fair, it's not United's app - it was a Continental creation and United took it over when the two carriers combined in early March.

It is the only travel app I consistently use.  I sometimes use a rental car one, and every now and again, I'll use either Marriott.

United has a very extensive applications - and of course, it's free, as it should be. 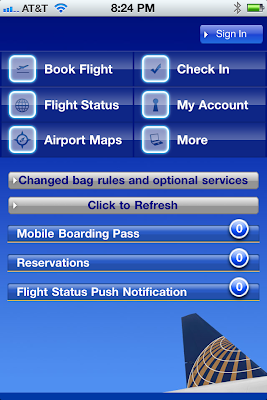 While I've never booked a flight, I use the check-in feature all the time. And while I don't have any flights tomorrow, I don't have the electronic ticket to pull up to show you. But you can see the 'mobile boarding pass' link.

For fun, I'll use the 'my account' part just to see how I'm doing on my way to gold status.  I don't think I'll be traveling enough to hit platinum this year.  Never say never, though.

What I do use is the 'flight status' especially when I'm trying to connect from flight to flight.  Mind you, United has a great way of updating you via text message, but if you want more info, it will tell you where the connecting flight is coming from, when it will land and when you will board and take off - at least estimated times.  ....and change of gates.

There is the 'more' too. 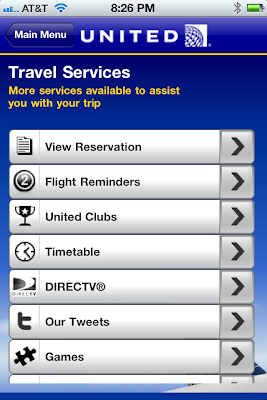 Admitted this is stuff I never use, but it's there for those who might want even more.  I can't find it anymore, but with Continental, there was a list that told you where you were on the upgrade list.  It also told you if the flight had power - meaning you could plug a device in to charge it, but I don't think that exists any longer.  Pooh.

I am fairly intuitive when it comes to airports and how they're laid out - and in reality, there aren't many major airports I haven't been in by this time.  I have never looked at the layouts in the in-flight magazines. But I realize I'm not everyone, so the maps on the app are not bad - but they're not great. 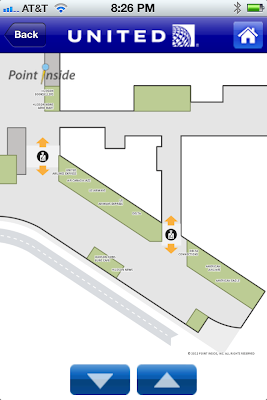 One does have to use their finger to drag the map left or right and the gates are not that clearly marked. Maybe they show better on an iPad (assuming they have the app), but on the phone it is iffy at best.

Still as free apps go, and for a travel one, it has been a life saver when trying to book a flight, get on a plane or change planes. I suppose it doesn't hurt that Continental United is my carrier of choice.

I don't know the casual traveler would use this the way I would, but if your a road warrior, it'd even be worth a cost to use it.  But thank g-d it's free.  They make enough money off of me.
Posted by Blobby at 6:45 AM

My fave is GateGuru -- lists all the restaurants in airports.