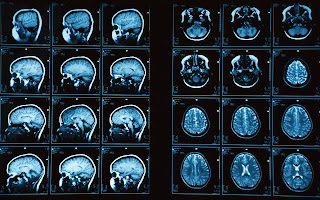 I mean, it's not an "official day", say like International Talk Like a Pirate Day or Arbor Day.  Maybe it should be - as there are more people who get MRIs on a daily basis than do anything for either of those two events.

There is nothing to report - in the way of results. I won't see those for a few days. If it's all good, I'll get a phone call or a release of my electronic medical record to me. If it's bad news, I'll be asked to come in and then wait to see the doc for that rousing piece of information.  I've been down this road before with my sarcoma.  I know how it works.

It's been pushing 20 years since I've gotten my last MRI - some things have changed with the process. Some, not so much.

This was not an open MRI, but the same damned closed one I've had before. I'm not really claustrophobic so I was ok, but I can see where folks might not like the experience at all. My nose - as big as it is - can almost scrape the top of the tube I'm in. But this time I had a head protector on, mainly because they were mapping the head and brain - not the leg.

And this time they did the first half without contrast and the last half with - which meant I needed to have an IV.  See? 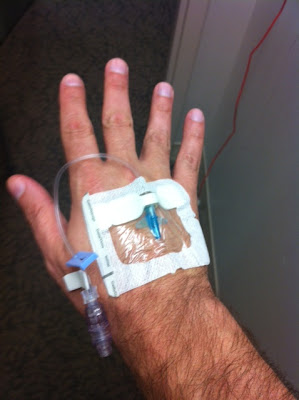 But before going this far, I was not as worried about results as I was worried about, ohhhh....metal ripping out of my body with the force of the magnet in the actual imaging machine.  With a metal plate and nine pins in my leg, I had to ask 3 or 4 (dozen) times "are you sure???"  Oddly until right before I went in, I forgot all about the Kevlar in my abdominal area.

Yes, since I don't have abs of steel, I went for the implant.  They didn't do a very good job at forming the 6-pack. I should sue!

I know I have a high pain tolerance, but I really didn't want this tearing from my insides out and have to have 710 hear about that whole, "he bled out" description.

But you know, the IV has metal on it. And this time, unlike last, they gave me headphones and I got to pick from a music selection!!!!!! 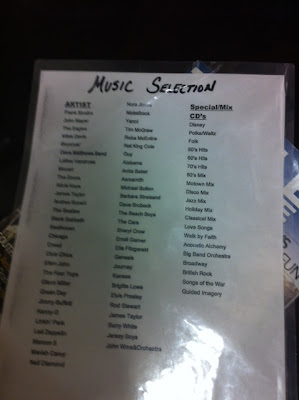 It's laminated and the overhead lighting makes it hard to read, but you can enlarge it to see.  The selections weren't great.  I went with Guided Imagery and Songs of War.

It really didn't matter what you picked, because after they hit 'start', you heard nothing but the machine. Those noises were hammers on metal, jackhammers, or a series of noises you hear at the 00:00:13 mark of this Sixteen Candles clip.

Hearing the noise during the test actually made me chuckle because I immediately thought of this scene. I even did, in my head, the line the dorks with jockstraps on their head did.  Lord, I'm a dork.

So, like with my leg, I'm taking some of this in stride and with humour. I mean, what else can I do?  Like last time, I have to keep in mind my way of coping isn't like everyone else's.  So no longer will I answer the phone:  "Hello, Glioblastoma Hotline".

Apparently it is only funny to me. And maybe Ted Kennedy's widow.

...but probably just me.


Song by: Paul McCartney & Wings
Posted by Blobby at 6:09 AM

I understand the humor; those of us who have been thru cancer know that you either "laugh or die". and I chose to laugh, as did gilda radner and you.

sending good karma for an excellent diagnosis your way.

Hmmm, no signs of alien parasites...

Those things really freak me out...Hope the news is good.

The folks I know in MRI all have panic attacks.

When you described the metal tearing out of your body, my brain immediately went to that scene in "Alien".

Well if it had pulled out that metal, you could have reached your goal weight with out the benefit of a good stomach flu.