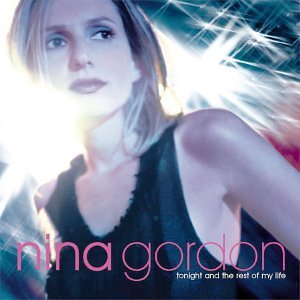 While many might not recognize Nina Gordon's name, you might remember her as a member of the group Veruca Salt (which was named after the Charlie & the Chocolate Factory character).  While this isn't her first time on record, in 2000 Gordon released her first solo album Tonight and the Rest of My Life.

For a long time, it was a go-to record for me. It was definitely rock-pop (yes, in that order) and it worked. 12 years later, I'm not sure I can say that. It is not a bad record and maybe I've overplayed a few tracks, making it harder to take in.

Produced by Bob Rock - who had helmed a few Metallica albums - he brought the rock part to the picture, though Veruca Salt was more rock than pop.  Gordon just tried her hand and it worked.

While I'm a big fan of the title track, 710 thinks it sounds too close to Sarah McLachlan's "Building a Mystery".  I was a big fan of the lead-off track, "Now I Can Die", but I played that one way too often for sure.  Probably still good, but I can't listen to it much anymore.

There are some really really good track here though:  "Got Me Down", "Hate Your Way", "Badway" and I "Number One Camera" - which contains a line from The Lion in Winter (one of the best movies ever!) that has stuck with me for years ("I could peel you like a pear and g-d would call it justice").

There are two slower songs I like too, "Hold on to Me" and a cover of the Carpenters' "The End of the World".  It's not better than Karen and Richard's version, but it's nice. The other handful of songs are just iffy.

Gordon kind of fizzled after this.  It took her six years to put out her second disk which kind of blew - save two tracks.  She recorded something in between that was never released, so it either really sucked or was brilliant but the record company couldn't sell it.

The joke is, they never really sold either of her two solo disks. I don't think she's currently active. I linked her to her Wiki site because her URL hasn't been updated since 2003, which hell, was three years before her last release.  No wonder it didn't sell squat (well, except to this poor sap who bought it!).

Maybe Veruca Salt will get back together.
Posted by Blobby at 7:15 AM

This CD didn't click for me. I really thought I'd like it. I do love the title track, though.

And the Seekers Louise.