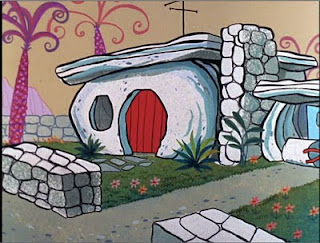 I'm iffy on this one - the site that is.

First off, I wasn't a huge fan of the Flintsones.  Secondly, I wasn't a fan at all of the late Dick Clark.

Personally, I thought Clark had better credibility on $10,000 Pyramid than he had on American Bandstand. He never seemed as hip as that rod that seemed to be up his ass.

So Rebecca is the one who told me about the house for sale and even sent me the site. Maybe she came across this because she's looking for a house herself, but doubtful this is the domicile of her dreams.  ....or anyone's dreams who isn't named Fred, Wilma, Betty or Barney.  I'm not sure even Mr. Slate would dig it.

Allegedly "they" are asking $3.5MM.  That seems pricey for something that has an elephant dishwasher, a woolly mammoth vacuum cleaner and a place where Ann Margrock, Stony Curtis and Cary Granite probably won't show up for some shindig.

Still, what a f'ugly place.  I think I'd rather be six feet under than have to live here.  But that's just me.
Posted by Blobby at 7:20 AM

I love the house but hate the decorations and the view ain't bad. I used to get my hair cut in a salon called The Cave because it resembled one - stalagmites and stalactites. No, they didn't wear loincloths.

OMG, no f-ing way would I live in THAT house! UGH!

It just shows how old Dick really was!

I think I would have went with a different color than sandstone. Maybe something like a bright raspberry.