I'm sure it was a mass email, but I responded anyways.

No, I'm not helping a Nigerian prince by giving him my Social Security Number and AmEx card.  Not again!

This time it was from the Ohio Democratic Party. Possibly as corrupt at the fake Nigerian prince, but at least this is the devil you think you know.

The email was a "reminder" for me to apply to be a delegate at the 2012 Democratic National Convention.

A reminder? That implies I knew about this at all or that it was on my calendar to begin with. It wasn't. But it did get me thinking - why not?

So I completed the 'declaration'.  That asks for basic demographic information and a few other questions - one of them asking if I am a member of the LGBT community. I figure checking that box might give me a leg-up for being selected for the process. Or maybe they're trying to weed me out. I'm not sure.

If I get picked, it will be because of checking that box. If I don't, it will be for the same reason. Glorious bastards!

Going to a convention would be kind of cool.  My mother went to the 1996 one - and to Clinton's second inauguration....well one of them.  But it is a sitting president's convention. Yeah, there will be balloons, banners and speeches.  There will even be a nomination process, but only because there has to be.  I don't think anyone is going to oppose the guy.

But conventions are much different than they even were in the mid-80s.  Remember when he VP nominee was announced at the convention - not months before? I remember Linda Ellerbee reporting how she staked out the only button maker in town of 1976 election to see who Carter picked as his VP. She was on a rooftop with a pair of binoculars peering in the factory window.  Awesome.

Last election we had to sit through two years ten weeks of Sarah Palin (you must watch Julianne Moore in Game Change).  That will be the same for all elections to come - co-campaigning for months.

So the 2012 DNC will be a schmooze fest, but it's in Charlotte. Still it would be interesting to be part of the process, no?  And maybe, just maybe I'll get selected and get to spend some time with Jon.

Maybe I can get some foam core, make one of these signs and sneak it in: 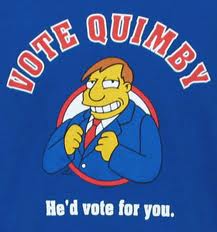 I do not understand what a convention is for if the party already has a candidate to run. PR I suppose.