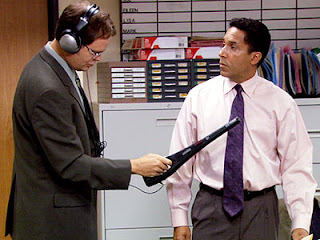 One of my favourite Office episodes is when Oscar comes out - or actually, is outed.

It's hilarious and very uncomfortable (on multiple levels) all at once.....like many Office episodes, I guess.

Of course, when trying to figure out who else in the office might be gay, Dwight turns to Jim about something called 'gaydar'.  Jim checks and says that Sharper Image is all sold out.  Dwight checks out Brookstone's site to see if they have any in stock.

As we all know, there is nothing really called Gaydar.  Or is there?

I'd like to think I have good built-in gaydar. We all think we do - or most of us say we do, whether it be true or not. I believe I'm more right than I am wrong when it comes to identifying a 'mo.  Of course, you get into variabilities when you get to 'wishful thinking'.  Stats get skewed. That could be a fatal mistake, if nothing else, for your credibility.

As you might know two things about me from this blog:  first, my oft-mentioned friends and I have kept a list of funny names (well, what we deem funny) for the last 15 years or so (Kirsten Payne?  Richard Tickle?  Pat Fenis? and yes, April Fresh), and second, that I read the obituaries on an almost daily basis.

Now and then, those two events merge. Not often, but now and again.  Like yesterday. 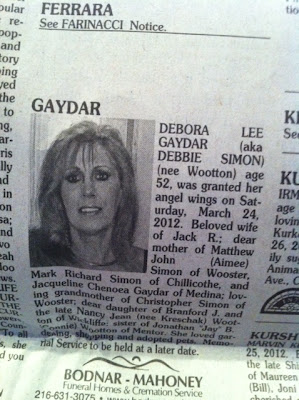 Yes, the family name should have been trademarked.  Gaydar®

Of course, maybe she didn't have the gift. She married into the name. She wasn't a blood relation.  Oh man, can you imagine her kids in high school?  Torture!

Naturally I sent this to 'the group'.  Two of them responded almost the same way (and yes, this is for John): RORRRRRRIP.


...and yes, Debora Lee Gaydar® has made the list of names.

Song by: Laurie Anderson
Posted by Blobby at 6:29 AM

I always loved seeing names like that in the paper. It was a gift living in a place with a high concentration of old people.

And I don't know if gaydar really exists. I think it's more that we gays are pretty astute at reading people to begin with. We have to be, especially the more traditional the area. I always went by carriage to start with, and then finished it off with listening for what I consider "gay voice." There was nothing absolutely certain about it, but you at least knew there was a better chance you'd be friends.

In the Charlotte (NC) Observer newspaper a few days ago, was a wedding announcement for Kellen Butts and John Seymour. The name with the pic in the newspaper was "Seymour-Butts"..Here's the link:

I have the most absolutely broken gaydar on the planet. I was once in a gay bar and didn't even know it. That's how broken it was.

And I really hope my surname isn't on that list. But I'll provide you with some fodder. My brother's name is worse than mine. My parents wanted to name him Richard, but knew everyone would shorten that to "Dick". So they gave him that as a middle name. His first name? Rodney. Not any better.