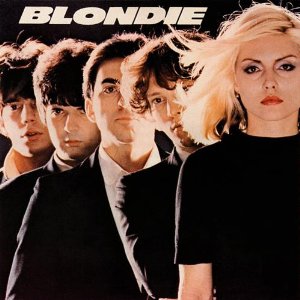 While Blondie's debut and eponymous album might not be their best (I still say Autoamerican is their crowning achievement), it does rank up there in the #2 or 3 position.  For a debut, Blondie was wickedly strong.  It still is.

With a 1976 release date, it was a great mix of punk, new wave, pop and, in a weird way, surf music.  Produced by Richard Gotteher, who would go on to helm the Go-Go's first disk five years later, there are similarities between the two on how he approached those mixed genres with both bands.

It really went nowhere in terms of charting or hit singles in the states, but it made an impact in the UK, the Australia and of course, with me. It had great sensibilities on where music was going and really forged the American part of New Wave.

In my opinion, each song is great on this disk - six of the 11 would be what I would consider to be outstanding.  Almost anyone with any of the versions of Blondie's 2,318 greatest hit compilations will know "X Offender" and "Rip Her to Shreds" - two of my personal favourites.  Oh, how I always thought of Amy Broadhead when I heard the latter.  I wanted to do just that.

Blondie is just a fun album with a great edge.  Where normally, without thinking, I'd pick the Pretenders debut as the best debut, but in reality it is probably Blondie.
Posted by Blobby at 6:39 AM

Good call. I loved this album (and the Pretenders debut). You seem to like the early new wave but never mention “The Cars”. Perhaps not your style?

The fastest selling debut album of the 70s was released the same time as “Blondie” – “Boston”.

Nice blog. I have visited before but I don't leave comments. Have a fun weekend. Mike and Glenn in 'beautiful Studio City Ca.'.

What a great choice. Perhaps the B 52's had an amazing release album as well. Your post seems timely as Deborah Harry was recently mistaken for Linsey Lohan.