State of the Art

I don't have much. I mean, how can I top video-me?

My friend Hillel sent me this pic, which I loved and he knew I would love.  ...and he was correct. 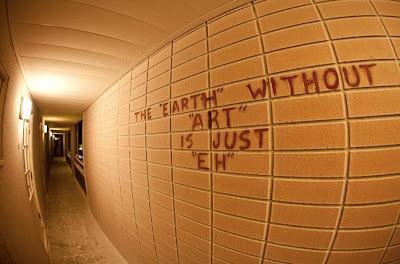 Oddly, it was taken and sent to him by a woman he sublet his NYC apartment to some 15 years back. He's originally from and is currently back in Los Angeles, but I find it amusing he still is in contact with someone he sublet his place to almost two decades back.  Maybe he still owns it, and maybe she still lives there. I didn't really think of that.

I love the fish-eye lens, and I really love the saying. I'm a big fan of art and am a huge proponent of the 'eh'.

Of course, I wouldn't use it with out his permission, even though technically it is not his image. If he wants to let his friend/tenant know,  I'm good with it.

"Meh" would mean it would be "Mearth". Which would be Mork and Mindy's kid, if I remember correctly.