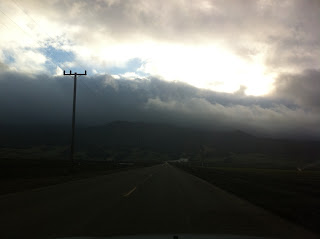 I feel so Dian Fossey here. Granted, it is central California, and not Rwanda, and where there might be silver bears here, probably no silverback apes.

Still below those clouds and Christy Lane sunbeams is a mountain that is enveloped by both. And a decent shot, since I was driving 55 miles per hour on a road I've been on three times. ....and no crashes.

I've been up for 23 hours now and ready for bed. I have a meeting tomorrow and then back to the airport for a red-eye back to Cleveburgh. But at least I have First Class from the flight from LAX to ORD - so I can sleep.

That is unless they show J. Edgar again.

I don't care that Dustin Lance Black wrote it. It was a hodge-podge at best. The going from early to late to mid life was too much - oh and the make-up was ghastly. Poor poor job. Clint Eastwood should be ashamed of himself.

Of course, having Hoover as gay was as much fun as watching Roy Cohn be a faggot.

There were one or two nice scenes in it, but Judi Dench couldn't save this, Dermot Mulroney was almost unrecognizable, and even though it's nice to see Lea Thompson still earning her SAG card, I couldn't help but be disinterested in the entire thing. Twice.

Maybe they should have shown Gorillas in the Mist, just to get me in the mood.


Song by: Johnny Mathis
Posted by Blobby at 6:34 AM

Do you ever load a movie onto your iPad and watch it on the plane?

Poor Mr. Hoover, no one wants him. The gays don't want to claim him; and the straights are not too happy with him either.
There is nothing more hurtful than a powerful closeted gay man not at ease with himself.