I Can't Make It Alone 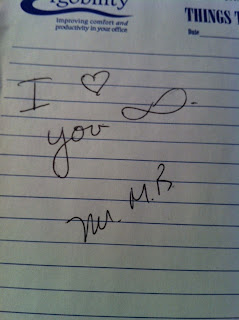 This note was left at my desk, in my office yesterday.  It now resides on the bulletin board next to me so I will be able to see it daily.

Don't bother asking about the "Mr. MB" signature - there are somethings I will be keeping to myself.  Yes, normally, I vomit stuff out for everyone here, but private isn't always bad.

We had a friend and neighbor die quite unexpectedly on Tuesday. It was quite upsetting for us. By us, I mean the few neighbors who were aware of the event.  His partner was out of town on business, which added to the sadness and angst.

Of course we empathized and sympathized with our friends, but I also know that I wasn't the only one thinking the same fate could have been any of our own.

Bill was older than either 710 or myself, but he was at least in the same box.  You know those age-range boxes you check for certain things?  He was in ours. Well, in 710's. I'll be in that box in 17 months.

Sleep was restless Tuesday night, or actually Wednesday morning when we got to bed. We held each other tight with thought of Bill, thoughts of Marty, thoughts of us.

I've always had this "plan" that I get to go first. While, sure it would be convenient for me,  it was heartbreaking to see the sorrow that leaves behind. So there really is a no win in this scenario.

One (or is it just me?) has fleeting thoughts of would it be safer to be alone than have a lifetime commitment only to be left alone?  That is quite a sad thought to have, admittedly, but one that has passed through my head.

I suppose the pain of loss is worth the time of love.  At least in theory. Time will tell - at least for one of us.

Until then, one Mr. MB will love me forever.

So sorry to hear about this!! Sending hugs and happy thoughts your way. :-)

I'm sorry to hear about what happened. It's never easy to lose a friend.

It's terrifying how a death of someone around your age makes you realize one's own mortality. They're called accidents for a reason after all...

We are now getting to the age where dropping dead out of the blue is a distinct possibility. Reminder to self - Must have will notarized. (I want to go first too.)

Mr. MB isn't the only one who will love you forever.

that was sad, indeed. but you did a fine job in eulogy.
I too wonder each day who/when of those I know, so I live as well as can be.

The end never seems to be easy. For anyone.