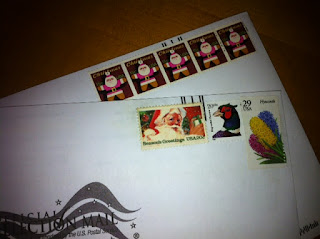 Seriously, could there be a more pathetic group of candidates than Paul, Gingrich, Santorum and Romney?  I suppose there could - if Perry and Bachmann were still around.

Not knowing where I'd be this week, I voted by mail weeks ago - and yes, we used holiday stamps from like 1974. There was a box of them and we used them up.  You just know we accidentally used one that was worth $63.000.

Cuyahoga County used to have pre-paid mail but these are tough times and now we have to pay $0.66 to vote.

Of course, I voted for none of the GOP candidates, even as a joke. In Ohio, for the primary, you have to change your party affiliation for that and it means four years of getting Republican propaganda. Totally not worth the joke of voting for Newt.  You know - just to fuck up the tight race between Mitt and Santorum.

Against what I ever would have considered most odds, Santorum is not only still in the race, but in a statistical dead heat with Romney - at least for Ohio.  And in some polls for the actual GOP nomination. Of course, I also thought Howard Dean would be the 2004 winner of the Dems.  So what do I know?

I'm voting more this time for judges, a few issues and county prosecutor. Our neighbor is running and oddly enough, I am supporting him and not just because he's my neighbor - he probably is the best one for the job.

I know how I'm voting in November for president, so this primary means nothing to me. I don't see a scenario where any of these guys don't self-destruct along the way - before, during or after the convention. They are nut bags.  I'm not thrilled with Obama, but what is the alternative?  Right now, he's the best we have.

Obama almost has to win if the GOP is going to take a long hard look at itself and start anew. They are so completely outdated and have painted themselves so deep into a corner they are almost going to have to clean house.

It is so 2004 again with them. They have no answers for real problems, so it is back to same-sex marriage, DADT and DOMA.  Scare tactics and they hope no one will see around that.

Welcome to the dumbing down of America - Pt XIV.

I agree with everything you said, blobby. the redumblicans also hate women, so ANOTHER reason not to vote for them!

One correction. It's "Supah" not Super Tuesday.

Ohio is a puzzling place; I have heard it said it is too small to be a country but too large to be an asylum.