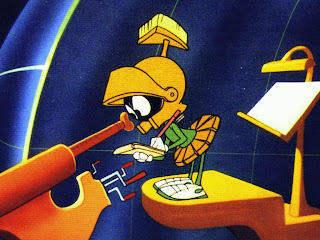 I saw a little news blurb over the weekend that made me stop, smile then get slightly annoyed.

A massive earthquake on Mars has been detected – suggesting there may be active volcanoes and even reservoirs of water that could sustain life on the Red Planet. Scientists tracked a series of boulder falls that resembled the deadly....

Are we so full of ourselves, that we think we're the center of the universe?  Think about it - Miss Universe is never held on any other celestial body!

Is it really so hard to call them "Marsquakes"? It's not like it happened here and then we shipped it over  - to another planet.

Or are we all so dumb that we wouldn't understand the movement of plates under the surface of a planet that wasn't ours, ones that would change their geological make-up?  Can I even use 'geology'?

One of those other things that always ground my gears - and still does - was the use of 'gate'.

Yeah, it applies to Watergate, well, because that was the actual place that the spying on the DNC happened.

There was no gate for Iran-Contra.  Monica Lewinsky had no gate (or panties either, probably).  Janet Jackson's nipple had a gate....but only one!  Sarah Palin's Alaska troopers didn't have a gate either.

Yet here we are, 40 years later, slapping 'gate' on every pseudo-scandal.  There is even a frickin' Wiki site devoted to the 'gate'. (Seriously - am I the only person to not have a Wiki page?) Oddly enough, Clinton's Whitewater was never called Whitewatergate.

I know I sound like Grandpa Simpson with these tirades.  I am only a few years away before that becomes a reality.


Song by: Joni Mitchell
Posted by Blobby at 6:25 AM

I want to know why we call the moon "Moon", but we have given all the planets moons cool names.

Then again, why did we name our planet after dirt?

And do aliens treat each other humanely?

"-gate" has gotten into our collective memories and lexicon, for better or worse.

If it cheers you up at all, I was one of the co-authors of the the paper that kicked off that brief Martian storm ('Possible evidence of paleomarsquakes from fallen boulder populations, Cerberus Fossae, Mars', Roberts et al), and we called them marsquakes all the way through.

I'm amused that the name seems to have caused as much fuss on the Internet as the discovery!

I think it was the illudium pu-36 exploding space modulator...