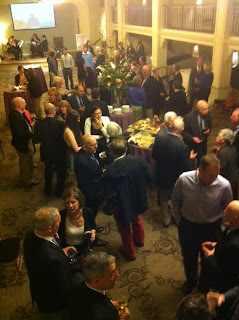 It was hard, but it wasn't hard.

Yesterday was the memorial for our friend Bill. It was still difficult to believe he was gone and knowing the right way to act or say things. Not so hard to talk of him lovingly or have great thoughts of him.  Not difficult to approach his partner and offer condolences, but knowing it would be hard to keep him engaged without suffocating him - knowing when to step back, as he'll need that time.

Being a non-religious event helped. That was nothing Bill ever would have wanted. It seems he probably wouldn't have wanted this gathering either, but when is it ever for the deceased?

There were three official eulogies, all of them ok, but nothing that stood out. Then a folks were offered to get up and speak or give an anecdote. Very few did.

I considered it, but it would have been nicer to know ahead of time to think of something to say that wasn't off the cuff.

Yesterday, Bill was surrounded by his family. People from as close as across the street to those who traveled from as far away as San Francisco. Folk who knew him less than a year and those long time folks for over 35 years.

Of course there was good food and some incredible sweets. They were nice sitting on the back patio eating with the new(er) and old friends laughing and sometimes dodging the obvious reason we were together. So many instances we were all in these same physical places at so many great parties. But it was different - clearly.  Even just getting some wine, Bill was always there to pour. Eyes would well-up, if not pour over.

I haven't been thinking about tons else these last ten days. Of course, as I lay awake from 02:00 to 06:00 this morning, I wrote a great little thing - in my head - that I could have and should have said at the service.

Song by:  Talking Heads
Posted by Blobby at 7:24 AM

It's always sad to lose a good person. I hope you are doing ok.

One of my co-workers died this week. It was such an odd event. I had no idea he was ill and then suddenly the official email went out. Now I only have regrets about things that went unsaid. Hopefully that was not the case between yourself and BIll.

that was a tender post; thank you for sharing it.