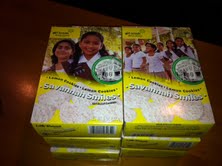 I have made no secret here of my love for cookies. It falls somewhere in between my affection for my cat and my parents........in that order.  Just an FYI.

Too many cookie choices are out for me because of this factor.  I'm not allergic, I just don't think nuts should be in food unless it is certain Chinese dishes.  Oh, how many salads I've picked almonds out of because one, they shouldn't be there and two, they are just bad nuts to begin with.

I will eat nuts by themselves (oh, shut UP!), but not in anything that isn't chicken with cashews or kung po something or other.  Normally, I would say it is a tactile thing, but then I'll eat M&Ms in cookies, and those don't really feel or crunch that differently than nuts - so that's not it.

So, when it comes times for Girl Scout Cookie time, it has almost always been about one cookie for me from them.  Yes, the classic:  Thin Mints.   .....save one year.

Almost a decade ago GSA sold a lemon cookie that was dusted with powder sugar.  They carried for one cookie season.  One.

I'll back up a little.  Much longer than 10 years ago Sunshine, when they existed, sold a cookie called Lemon Coolers.  Lemon cookies that were dusted with a lemon powdered sugar.  Sunshine went belly-up and I think Keebler bought and then trashed their recipes.

Lemon Coolers were one of those things that helped Blobby get plump in the first place. The place between eating till full and satisfied never intersected. I could eat box after box after box. However, even in their heyday they were hard to locate, so when I did - I bought.  ...and bought and bought.

So, hit year 2000 or so when the GSA started selling them under another name. Oh, it was a happy day for Blobby and a year later, a very sad one. Clearly the rest of the cookie-buying public did not share his affection for these and they were not a top seller (I'm assuming). The following year, they went back to those shitty lemon cremes ones.  Blech.

So colour me surprised when this year, we are back with the cookies I love so much! I sought out where they were being sold, since no one comes by the house and there is no office where some pushy mother is selling them for her kid. Ruckiry (not Jon's boss), GSA has this covered where you can search by zip code

On the table there were five boxes and I opted to buy only those, even though there was a case under the table. But those pushy mothers (no, not really) said if I bought six boxes, I was eligible to win cookies for a year.

I didn't ask the parameters of this "deal", but clearly, Blobby could financially break the Girl Scouts with that kind of arrangement. If I ate a box a day at $3.50 a pop, well, you can do the math of the destruction I would make.  But I'm guessing they limit you to something like one box per month.

So the irony? I've had the cookies for a week and haven't broken the seal on the box, let alone ingested one cookie. I now have them and am in fear of well, eating them all - but more importantly, eating them all and then no longer having access to the supply and / or the Girl Scouts not selling them for another 10 years.

Song by: the National
Posted by Blobby at 7:09 AM

Have you tried one from this batch yet? Maybe you won't like them or maybe they've added nuts. And if they are as good as you hope or maybe even better, you can stock up. Maybe through a Lemon Cooler Cookie Party with lemon drop shots or some other lemony alcoholic beverage.

I remember lemon coolers! those bitches...

I am the EXACT same way about nuts in sweets-- can't stand them. Why ruin a brownie with walnuts or pecans?? Or wreck banana bread with them?

I think nuts should only be placed in savory items (salads included).

Oh-- I do have one caveat... pecan pie. But only if the pecans on top are CRISP.

When it comes to cookies (any sweet, really) I'm about as choosey as a five dollar whore. It might sound funny coming from a gay man, but fruity cookies are my least favorite. They will be devoured last.

I love Thin Mints as they are the best cookies ever. My father used to always buy a box from kids who were selling at work. I'd always find them and eat a least a roll before he realized what was going on.

My sister was always a big fan of the Lemon Pastry Cremes, and everyone else in my family loved the Caramel Delights, which I think later became Samoas. My Partner loves them too. Too much coconut for my tastes though.

I sympathize with the boxes that you could go through. It's why I keep them in the freezer. I find I eat less if they're rock solid.