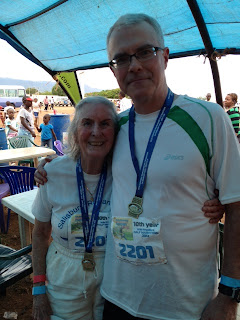 Morty and his partner, George just got back from Africa.  ...Morty is on the left.  It's an October - December romance.

But Geo is on the right.

The duo went to climb Mt. Kilimanjaro - and they succeeded, which is totally awesome and cool.  Well, I heard it was / is.  I haven't been there, but I once went to African Lion Safari.  I'm sure it is the exact same thing

Morty ran yet another marathon (how many is this Mort?), and this is his fourth continent on which to run.  I don't think he ran one in Europe, but I might be mistaken. I am always proud of Morty's accomplishments. When he does one of these things it makes me want to run.......but then that idea passes after about 47 seconds.  Phew.

Who I am really proud of is George.

George walked the half-marathon. It's not that he can't run - half or the whole, he just opted for the half. The walk part?  He put one foot in front of the other with Margaret, an 88 year old woman.  At 81 she became the oldest person to complete a marathon on all seven continents.

While I would have liked to use Morty and George as the source of all truth on this, yeahhhh, I couldn't let that happen.  But thanks to Al Gore's internets, I was able to verify this as truth.

Morty has like 13 30 more years to beat this record.  Then maybe he can slow down and walk with the one he loves.

Still, what a treat for George to be able to walk and have a conversation with a neat lady like that.  And it was probably a thrill for Margaret too. George is a fun and interesting guy and I'm sure there were a slew of bugs over in Africa to discuss of which Margaret was unaware.


Song by: Jerry Lewis  (live on the Champs-Élysées)
Posted by Blobby at 6:51 AM

What a great tribute to Geo and Margaret. She is quite the pistol.

My authentication word is "onesore". How do they do it???

It wouldn't have killed you to include one little photo of Morty too, would it?