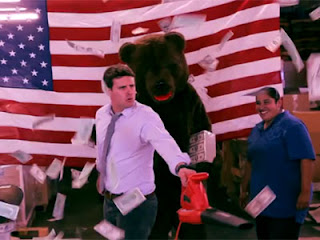 LeBos' blog directed me to this a few weeks back and I've shared the site with a number of folks already, one being my sister who plays tennis and is one of the few who will DVR tennis the Australian and French opens so she can see them upon waking.  Oh, once you see the ad you'll understand why I said that.

DSC gets the nod this month mostly for it's video ad, which has totally gone viral.  It has made into a number of magazines, such as New York and Entertainment Weekly.  BosGuy can be happy he was way ahead of the curve on this one.

It's far enough left of center, that it just made me laugh and laugh.  Because of the ad, Dollar Shave Club might actually get my business.

$1 a month doesn't seem bad, until you realize how frickin' cheap I truly am.

I currently have five (FIVE!) razors in rotation. Three of them are the disposable kind (shower, gym bag, travel kit).  Two are the nicer brands (Fusion?) - for the face; one in shower another in gym bag.  The nice ones are usually free mailers - and Gillette and Shick know they get you with those, because it is blades that will break the bank, never the razor.

BTW, it's the disposable ones that shave the noggin.

Since there are five, and I don't necessarily shave daily (shut up, I know!) and I will use them until I am cutting myself left and right, I don't swap out my blades that often. Certainly not every month. I'm totally sure I should, but I just don't. Once again:  CHEAP.

So, for $12 a year, I could get a decent razor system going, but we'll see.  I have a number of blades to use up currently. I don't need more clutter.

For those who don't hit the hyperlink at the top of the post, you can at least see that viral video below. The spokesman (true founder?  I doubt it) is cute.  The writing is funny.  I love the line about the single blade and polio.  Allegedly, the ad was written by someone in the Upright Citizens Brigade - the comedy troupe that launched Leslie Knope Amy Poehler.  I can see that.

Aww thanks for the shout out. Please do let me know if you end up ordering blades from these guys. I'm seriously contemplating it as well.

And I want the owner guy. That video made me laugh-- and that's a tricky thing to do.