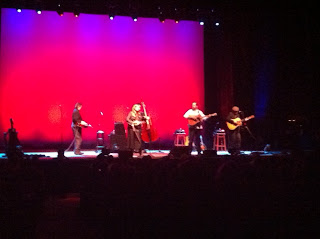 I considered not doing a post as some kind of April Fool's Joke, but then figured no one would get it. Because if you have to point out it's a joke, it's not a joke. And since I write at a sixth grade level, for a sixth grade level, I'm sure they wouldn't get the prank.

So, no April Fools anything. Honestly, I'm not clever enough to come up with anything elaborate, possibly not even funny.

This would make the third time in about 12 years. They are out promoting their "new" (a year old now) album, Paper Airplane.

We had great seats, not that you could tell by the iPhone pics. They maybe could have been better had I used a flash, but I didn't want to be "that guy".  And really, we were far enough back I don't think I would have benefited from it.

I'm always impressed by the live performances of AKUS.  Ya gotta figure if you can get all your touring equipment into a small truck, you're surviving on talent.  If the curtain, screen and lights belonged to the venue, then they could get their stuff into a station wagon.

Two hours of solid playing and a little banter. Funny banter too.

For those who are not aware, AKUS is a full-on bluegrass band. Even more so live than on record. I'd say they polish stuff up for recording, but they really don't. What you hear is what you get. But at least in a live performance, they will expand a little on the playing, especially the fiddle and dobro.  Krauss barely played the fiddle on their last disk, but incorporated into those songs last night.  They did a few very cool instrumental numbers, which never happens on their commercial disks anymore.

Since it is me, of course I have a few "complaints".  Granted the group has 25 years of material, but the amount of stuff not covered seems large. Out of their last five albums, they only played eight songs - and I should mention of those five albums, one got no representation.

Mind you, I'm a fan from longer back, so I knew the older stuff, but you have to figure many didn't. And while they throw stuff in for the long-timers, it is always the same older stuff. I don't think it is coincidence that the three times I've seen them they throw in those same 3-4 oldest stuff.  They have a huge catalog to mix in.  Small complaint.

And yes, Jerry Douglas is an incredible dobro player. But I'm not a fan of solos. Drum, bass, guitar, triangle or glockenspiel. Two songs of just dobro seemed to drag on forever, but I get that the main singers need a little break.

And yes, audience participation grinds my gears. I get the band is bluegrass, but it's a concert, not a hootenanny. If you feel the need to clap along with a song - commit to it. You can't even make it three measures before it dies off - and you can't all clap in unison? Get it together people.

But Krauss and Dan Tyminski are great vocalists. Strong, consistent and talented. It is nice to hear performers who have never needed the use for auto-tune and are proficient at playing their own instruments. I get that this kind of music isn't for everyone, but I do believe most people who'd stumble into a concert like this would be impressed. It would be hard not to.

The hall was packed, but I'm guessing not sold out - still they had a draw. Bluegrass in Cleveland - who knew?  If they show up to your neck of the woods, it's totally worth the price of a ticket.

For a bonus, I'll throw in one of their videos.


Song by: Alison Krauss + Union Station
Posted by Blobby at 8:16 AM

I somehow keep missing AKUS every single time they're in my neck of the woods. Then again, I don't know if I could drag the Husbear to see any bluegrass concert. He'll be upset when I start learning the banjo. ;-)

I very much enjoy your music postings. I put them on and listen to them as I set up blog surfing; this gives me an opportunity to focus on the music and then see the video for the ones that catch my fancy.
Thanks to you I have learned many good artists.