Life on a String 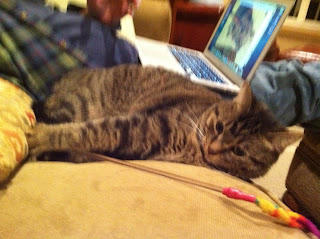 Thanks to 12 of 12, you've all seen Sophie's string. Her absolute most favourite toy ever.  If we had it out at all times, she'd play with it at all times.


Many mornings I have found it in bed upon waking. She'll drag that thing around, lucite wand and all. It's quite fun to watch.

We do have to put it away and limit her times with said string. There is no "off" for her with it and it does become exhausting having her yell at us to play with her.

However, there is one little problem.  The string has gone missing.  We're not quite sure how.

It is possible that Soph dragged it and left it somewhere unknown to us. And while possible, if that was the scenario, it's more probable she'd drag it back out again to torture me with her meowing and meowing to be played with.

Another option is somehow the contractor or workers accidentally disposed of it when cleaning up.

A third consideration is that it is in the Room of Requirement.  Or as you'd call it - one of the guest bedrooms where we have stored everything during this renovation. Even there, it might be horribly horribly lost for months.

We've tried to provide other string, but it was no use - it wasn't the same....for her or us. Naturally, we've been to a few pet stores to find a duplicate or at least a similar. Alas, it is not meant to be.

Over the weekend, while at one such store (after exchanging "words" with the help how the Calico cat they had was indeed not Siamese!....or a 'he'.), I flashed on a scene from Best in Show of a hilarious Parker Posey in a pet store looking for an identical toy to the one she's lost.  (sorry, there is no embed feature on the clip.really, so I linked it - and while the entire clip is funny, I flashed on the part starting at the two minute mark.)

Still we bought two inferior strings - neither of them will do......and won't isn't long for this world. She'll rip that apart in no time. 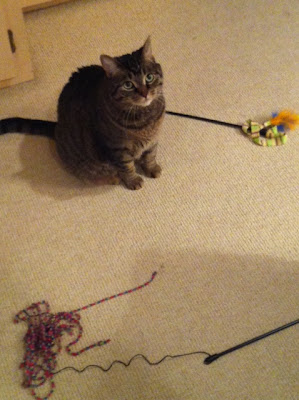 I'm sure I'm projecting, but she looks so forlorn without "her" toy. These two aren't cutting it.

Ruckiry (not Jon's boss), 710 thinks he found it on-line and ordered it.  Here's hoping.  Of course, when it does arrive, I'll wager the original one turns up.

Song by: Laurie Anderson
Posted by Blobby at 7:11 AM

Email ThisBlogThis!Share to TwitterShare to FacebookShare to Pinterest
Labels: Cats

Poor thing! - and, what's more 'Poor you!' But I do really hope that object of unique worth gets found - and quickly.
What I find fascinating and funny is how cats take what we call 'play' so seriously. It's as though their little lives depended on it, at least until they get bored, which usually isn't very long.
Btw: I do find the entire 'Best in Show' film a total hoot. One on my personal list of 'funniest films ever' - probably because it's a near- accurate portrayal of eccentricities of some dog owners - and I know we cat-owners have our own too.

what a sweet looking pussy cat.

she actually does look forlorn...so cute