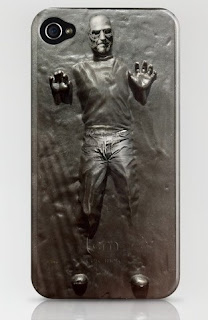 Remember a few months ago when I went on about really wanting a Steve Jobs frozen in carbonite iPhone case?

Really?  You don't?  I thought that would still be cocktail chatter amongst you people. I am almost sure I went on for about 3-4 sentences regarding it a year or so ago?  Hard to believe you're still not yakking about it.

Anyhoo, of course Apple and the now-late Mr. Jobs had a little hissy fit about it being out there, because apparently neither of them have / had any sense of humour.  Seriously, who was it hurting?

In theory, they should have taken the design and sold it making a huge-ass profit. We know Stevie-boy liked doing that.

So what few of those iPhone cases were actually out there shot up in price well beyond what I was willing to spend on a lark or a gag.  Pooh.

Fast forward 8-10 months and I get the mail earlier this week. An envelope with my name on it, but it wasn't a letter, and I remembered ordering nothing. There was no return address or receipt.  Curious.

But I do love when the Gift Fairy arrives.

I make lunch, then take the envelope up to my office to work and to open and eat.  Yes, I can multi-task.

I was ever so surprised when I pulled this out of the package: 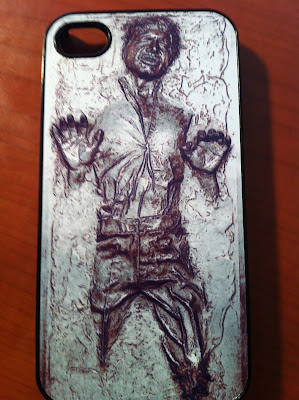 No, it's not Steve - it is the original....well, scaled down.  Han Solo frozen in carbonite, ala The Empire Strikes Back and into Return of the Jedi.

Sure he didn't invent the iPod or the MacBookPro, but he did do the Kessel Run in 12 parsecs. That has to account for something, no?

So my first thought was that 710 got this for me, but a quick text had him perplexed as to what I was talking about, so I ruled him out almost immediately.

My second assumption proved to be correct. Rebecca. She's the only other person who ever buys me anything - and yes, that includes my mother and father.  And trust me, my mother barely knows of the iPhone and while we rented Star Wars when we first got our Betamax (yes, you heard me!), my mother fell asleep each of the 15 times we watched it that weekend. She never really saw it, let alone know of Han Solo.  It had to be Becky.

Of course, after posting the pic on Facebook, she let me know, but not before Ditto tried to steal credit.

I'm almost a-scared to put it on my phone, but I will.  I have to see who notices.

Song by: Rachel Sweet
Posted by Blobby at 6:44 AM

Cubby said...
This comment has been removed by the author.
8:46 AM EDT

Very good. This should counteract the bluetooth headset nicely. If anyone at the airport looks at you funny for talking to yourself, just flash them Han Solo and you'll reestablish your coolness instantly.

I still need to try to find this for my phone. Want.