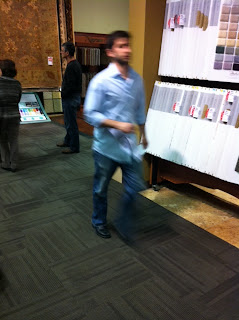 As we get closer to finishing our reno, we went out for the fourth or fifth time to look for some kind of flooring for the bedroom.

First it was wall-to-wall carpet and we kind of agreed on the same sample and colour - which never happens.  It was a bit pricey, but you know, I'm cheap, so they're all pricey.

Of course, then we pulled up the old crap and found decent floors of hardwood and had them redone.  They look pretty, but you know in non-summer months, it'd be a wee bit nippy (or a knee bit whippy - to my Poplar friends) on the piggies that go wee-wee-wee, all the way to the bathroom.

And it's a big room, so it'd be echo-y if there weren't some kind of woven fabric on the ground.

So the wall-2-wall we found could be smaller and bound so it's like an area rug. Later we opted against it as it is too monochromatic for anything but wall-2-wall.

But looking for area rugs is like looking for tile.....a possible one way ticket to Divorceville.

Actually, 710 and I got along fine, except that I like oogled Nate, the key-uuuuuute carpet guy. He was moving to fast for me to get a great shot of. 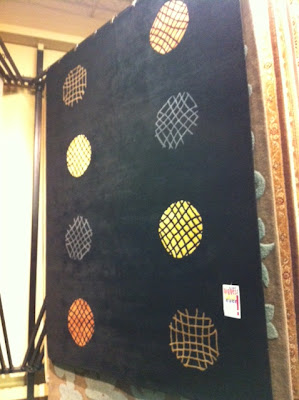 Or we could have gone another - yet equally as ugly of a - route. 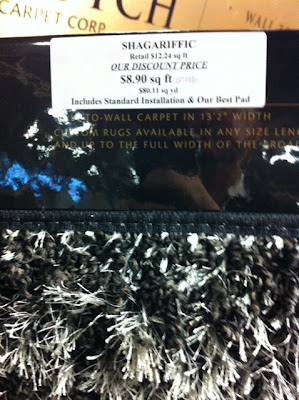 We left this store with nothing but a hope Nate would call with something from the warehouse that was a close-out (he did - he's bringing it over today to see how it looks.  I'm not spending a seemingly ton of money on something we might hate - and hey, he offered).

But when we left that store on Saturday, we went to another one. If the last store had "high" prices - this store were out of this world.  Beautiful carpets, but like anything of beauty, you pay a price.  We left empty-handed and felt a bit pressured by the owner.

Here is hoping the rug Nate brings today will work. He'll leave it for a few days then will have to come pick it up.  Even if we want it, it's not the size - just a sample. I swear it's not a ploy to get him into the bedroom.  The empty empty bedroom.

I'm trying not to make a rash, or expensive, decision, just so we can finish this project.  ....and I really want it to be over.  Not enough to get shagariffic carpet at $8.99 per square foot......or square mile.

Song by: Duran Duran
Posted by Blobby at 6:58 AM

You could buy a loom and weave your own rug.

Or handcuff Nate to the banister and make him weave one for y'all. When he's not busy doing other... stuff.

I happen to think shag carpets feel excellent on the piggy.