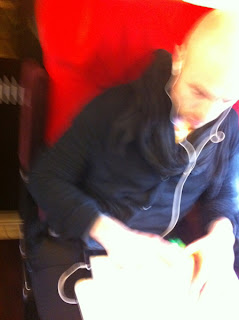 I'm sure I've told this story here before, but I can't find it to hyperlink, so I'll tell it again before moving into the second part of the post.

A decade and a half ago, 710 and I invited Becky to Rehoboth for a week of fun. She flew from Houston to DC where we picked her up and drove. We also stayed a few days in DC and at the end of the trip she decided she'd be moving to our nation's capital.  Good for her.

The next year we did the same thing, but picked her up in her new town of Washington DC...and of course stayed a few days.

Anyhoooo.....the three of us were walking up to Kramerbooks and we passed this guy. While seeing him lasted all of a split second, his presence took me aback, but I said nothing and kept walking with the crew.

About a block later, Becky says, "wasn't it weird how much that guy looked just like Blobby?"  I let out a laugh, an exasperated breath and the words, "oh thank g-d, you saw that too!"  all at the same time, thinking I had not been crazy - and that someone else had seen him and noticed.

They say everyone has a doppelganger and I had just seen mine. It was a little freaky. Now and again, I have wondered if he saw me and has had similar conversations with his friends.

I back-storied that entire scene for this one:

I got a FB message from Brett R (not Brett C) as he was traveling from, I'm assuming, the Netherlands to Paris, as he often does via train.  The e-conversation was fairly real time, and it had me amused, if nothing else that it was transcontinental / real-time.  *Please note - some of the conversation has been edited or combined to keep it more condensed for my readers.

Brett:  Sure you're not on the train to Paris? Sitting across a guy that could be your twin brother! I was looking at him thinking that he looked familiar...then realised he looks like you

Brett: Yea....crossed my mind, but he's facing me and Not asleep..will try, though

Blob: Get with the program! I get the pic and you get a blog reference. Everybody wins. Except for the poor sap on the train.

(Clearly poor Brett has never used his smartphone for evil - like taking pics of unsuspecting busboys or pictures for TapThatGuy.)

Brett: Not that I need a blog reference....and fuck, he just moved to a seat which had an empty one next to it... Hang on.

Brett: Here you go....I have to stop pretending to go to the toilet!!! 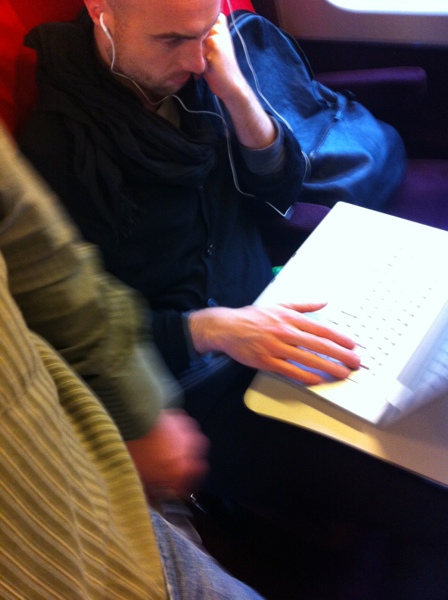 We went on to mention that he's rocking the bald look, had the earbuds and even the arch in the eyebrow(s).  He's got those thin bony fingers, which are like mine. His nose isn't large enough though.

I thought it, but Brett said typed it: Yea....he wouldn't actually be your twin, but he's pretty damn close.

My reply was: We don't need two of me.

....and assuming he was not the guy from DC, g-d knows we most certainly don't need three of me.

Clearly Brett stumbled upon an international plot to grow Blobby clones and place them in sleeper cells around the globe. No doubt the gay mafia is behind this scheme and will activate the Blobby clones someday, most likely via an a secret code in an Ikea catalog. It's the only rational explanation.

Could have been fun for Brett to show him your pic so he could see/meet his almostbynotquite twin.

Or it could be that you are a Cylon sleeper agent awaiting activation. Model #711?

Doppelganger stories tend to be some of the best. It's funny how many I've found in France. Here, they're a sosie though.

Anonymous beat me to it. You're the 12th model, aren't you?