Heartache by the Number

I'm thinking I've got nothing going on here.  Nothing.  Though 710 tells me I shouldn't tell you that. I suppose I could do an Earth Day post, but pfffffft.

I knew Blogger was putting forth a new editor but I didn't know they'd be making it mandatory.  I avoided the 'update your blog' button for weeks - then late this week, they were "kind enough" to switch it all over for me.

I'm still getting used to it all. It's not bad, just different.

What has been enthralling me is the stats section. No, you can't view it on your own, just me the owner can. ...well that and Anonymous or Julian Assange....or Rupert Murdoch's team. ...or any high school hacker, I suppose.

Did you know that Sean over at Just a Jeep Guy is the #1 referrer to my blog?  He wins by like 3x as much as #2, John at I Got Somethin' to Say.

And while they are all my posts, and I write them, there is no accounting for taste. 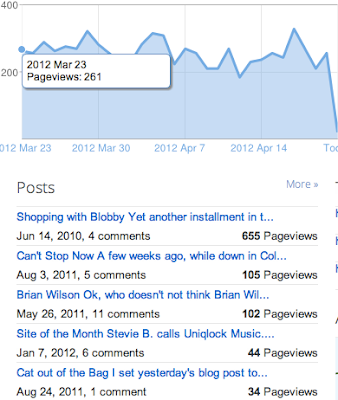 In the last month (this shot is just from the last 30 days) - and of all time (!!!) - my most viewed post is a Shopping with Blobby post. .....about a panty liner that stops camel toe!

On the other hand, Maru (who got a shout out on 30 Rock a few weeks ago), that hottie Stevie B and that hotter hottie Brian Wilson (sorry Steve) all make the top 5.

No surprise my audience is mostly from the U.S. - my humour just doesn't translate across the pond. Who knew that Germany would score higher than France?  And fuck, 346 people have read me via Xbox.  I didn't even know that was possible.

I'm a stats geek, so I'll dive into this deeper. It'll give me something to do when I'm bored playing Words with Friends.

Ok, now I have to pick my My Music Monday - though I'm pretty sure I know that track.


Song by:  Rosanne Cash w Elvis Costello
Posted by Blobby at 6:58 AM

Strange--I was offered no such new editor, nor have I been changed over by Blogger. For me nothing has changed.

Where can I get that pantyliner?

do your frequent fliers get any prizes?

Yeah, I woke up to the new Blogger a few days ago. At least they didn't change my page. Except now the mobile Blogger is upon us, and I HATE it. You can't expand the screen, and scrolling frequently makes the posts jump to the next one by accident. I go straight to the bottom of the page for "web version."