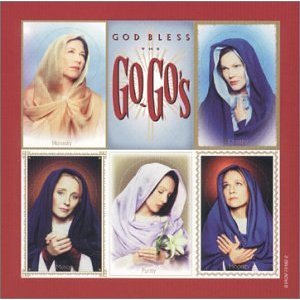 You really just want to love the Go-Go's don't you?  Their debut, Beauty & the Beat was in heavy rotration for a number of years and it's still fun to revisit.

Their output was little - four albums over 31 years - and there was an 16 year wait between albums three and four (and it's been 11 since this last one!).  I don't care what anyone says Vacation was a throw-away that they coughed up to keep the momentum going.

I love watching or reading about their perception of themselves being "punk".  They really need to learn what a punk band is. If they go by a few folks who form a band who didn't know how to play instruments or keep in tune, then yes, by all means, they were "punk".

In reality, they were pure pop.   ....not that there's anything wrong with that.

Older, for their 2001 release of G-d Bless the Go-Go's, the continued more in the vein of Talk Show than anything else. Not that Talk Show was bad - it had its moments.  But like it's "immediate" predecessor, G-d Bless has a few really good songs and lots of filler.

I think I only have selected three songs here to take place on my iPhone:  "Unforgiven", "Automatic Rainy Day" and the albums would-be title song (before they opted to name it what they did) "Vision of Nowness".

The band is fine form and I'm guessing Belinda's voice has never been stronger (with somewhat less vibrato), but the writing on some of the songs is sub-par.  "Throw Me a Curve" isn't good, nor is "Kissing Asphalt".  "Stuck in My Car" and "Apology" make an attempt, but isn't quite there - though the was latter released as a single that went nowhere!  And they don't do well with slow songs ("Here You Are", "Daisy Chain").

Still the disk is almost worth the price for "Automatic Rainy Day" and "Vision of Nowness".  ....and now that iTunes exists, you don't have to buy the entire disk.

Belinda & crew are still out there touring and allegedly won't release any more albums per se.  They have alluded to the fact with the music business model, it would be more beneficial to release a song here or there for download.....and unfortunately, they are probably correct.  But maybe they can make those one-off songs count.

I loved this cd but thought it picked up where Beauty and the Beat left off. I have seen them almost every time they have toured since the beginning and saw them after the release of GBTGG's and Belinda sober is a much better singer and performer. I do miss their music.

If you have time, read Belinda's book. the first quarter deals with her father's abuse, weight and how the GoGo's came to be. Then she starts drinking and doing drugs - pretty scary but lacks any emotional attachment and how could it when you're numbing your feelings? She doesn't dish on the rest of the band as the book is more about her personal journey. The last quarter of the book is about her getting sober, family (gay son) and a look to the future.