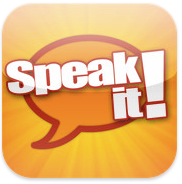 
No, I'm not resting on my laurels, but Birdie, who you might know from here (and was the first blogger I had ever met in person) is tasked with reviewing an app I most likely would never have the need for.  But you never know.


"Tasked" might be strong, but I did reach out her asking is she'd like to review it. She readily agreed.  ...and since she even wrote part of the backstory, I don't even have to intro it.


When I had surgery a couple of months ago, one vocal cord was damaged when I was intubated. It resulted in further surgery to remove the scar tissue from my vocal cord, and I was unable to speak for three weeks.

Short encounters at the cash register or bank window went well enough with notes, but when I was in meetings or in conversations at home, gesturing and writing wasn’t working. My speech therapist recommended I use the Speakit! app on my iPad. It was a good idea. (It also works on the iPhone, a handy thing at restaurants.)

I can type faster than I can write, and people didn’t have to be next to me to read when I used Speakit!. The $2 app offers four voices (two each male and female, American or British) that are reasonably easy to understand. A few words still mess up the program and cannot be understood, but people usually understood the context.

The iPad version can store text. I used it to introduce the program to people, to store my husband’s name so I could get his attention—he hated that —and to write things I needed to bring up in a meeting. When I planned ahead, I could change the spelling of a word that didn’t come out right. For example, I named the program “Cyrano” and stored it in my introduction. But Speakit pronounced it seerAHno. I played with it a bit and found that “seerah no” got the pronunciation I needed.

Other than the occasional odd pronunciation, I highly recommend this app for those whose voice cannot be strained for a while. The speech is richer and louder on the iPad because it has better speakers, but it is adequate on the iPhone as well.

There are a ton of extra voices you can purchase for $1 each, including translations. You can write in English and select the French voice to say it in French. Wonderful for travel!

It does look cool for traveling.

I think I would use it to just randomly annoy people. Well, annoy them more than I currently do. ;-)