It's cooking day.  Well, yesterday was.

Have you ever made chicken and just can't get it to brown decently?  Especially if it is boneless, skinless chicken boobies?  We have that issue all the time.

But while watching Cook's Country, I came across the technique called 'velveting'.  I know, it sounds like something Vanity 6 would do - right?

Long and short - it worked and it didn't.  Maybe the pan wasn't hot enough, maybe too much velvet. It's hard to say. We followed the recipe to the T, so I'm not sure where we went wrong.  Mind you - if it had surpassed expectations, this would be an "I".  Since it was average it is a "we".

In glass baking disk:
Poke thick end with fork 4-6 times
Sprinkle with ½ tsp of salt for each breast.
Cover with foil
In 275 degree oven for 30-40 minutes
145-150 degree check
Take out, put onto plate with paper towels, pat dry

Then the Velveting:
2 tbls melted butter
1 tbl of flour
1 tsp of cornstarch
mix together 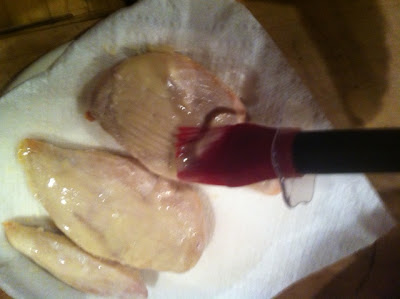 You just brush the velveting on the basically albino chicken. 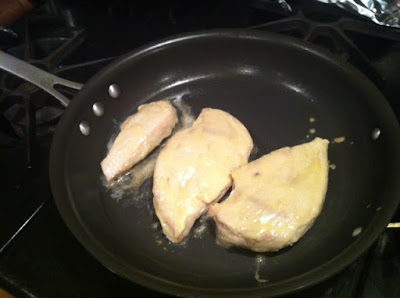 Then put it in the skillet. 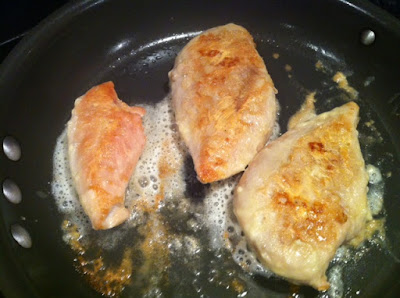 It browned up, but not as much as I expected it to.

Then it was pan sauce time: 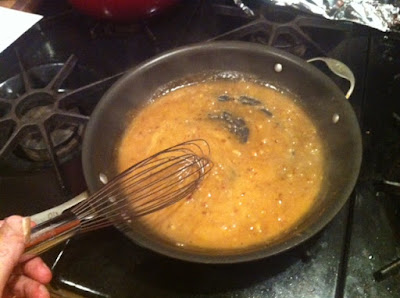 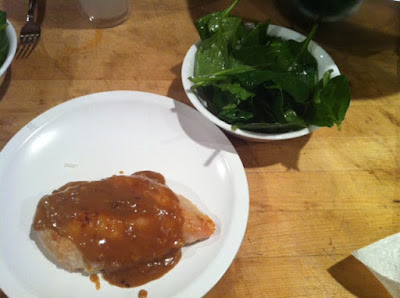 Here's the finished product. Honestly, it tasted fine, but the pan sauce reduced more to a gravy like consistency. Maybe I reduced it too much.  I ended up liking the spinach salad more than the actual main course. Again, not that it was bad, but I am thinking Julia on Cook's Country had a better end-result.

...and since it is Cook's Country, the kitchen was a mess. They insist on making one use more utensils than one possibly needs to dirty.

Email ThisBlogThis!Share to TwitterShare to FacebookShare to Pinterest
Labels: Cooking

Honey, if you cook for me, I'll clean the kitchen. That meal looks pretty good.

Don't forget the folks on Cook's Country have a staff of interns who spend a lot of effort perfecting the recipe before they turn the cameras on. You can't possibly be expected to produce equivalent quality on your first attempt. Your pics sure look good though.

I like it when you cook! Interesting method. I think your browning problem might be the pan...nonstick never browns very well.

See? That Christopher Kimball and his staff are giving us impossible recipes to follow! Remember my overflowing lava cake a few weeks back that was supposed to be a chocolate pound cake? Delicious but ugh, what a mess in the oven.

All that being said, I'd still eat that chicken dinner. Looks pretty delicious to me.

I got a subscription to Cook's for Christmas. It should arrive soon; I will be careful!