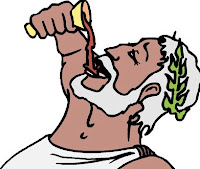 You know I like the drink. Lately, it is mostly the grape - red ones or green.  I'm not that picky.

So you'd think the holidays would be a time of imbibing.  And while it happened, it wasn't excessive, as I imagined it might.

First off, Rebecca and crew stayed with us.  And while in theory, with her around, drinking would have been on the list of 'to do', we didn't.  At all.  Not one.  I was taking her lead - and well, since she didn't drink, neither did I.  I was trying to be a good host, I suppose.

And of course, I mentioned here, trying to drink on xmas eve, which is really more about my parent's birthdays. But I had a number of unfinished glasses of vino placed around the house and none of them finished. What a waste.

I made up a little ground on New Year's Day.  NYE is for amateurs, so I don't go out and drink then.  But at an open house down the street, I put away quite a bit - and all before 16:00.  I did a power nap when I got home. I swear it wasn't considered "passing out".  Just a Sunday afternoon nap.

Oh, and the night before that we had friend over for dinner and yes, Tom and I killed two bottles of red. 710 might have had a glass.  Perhaps two.  Ruckiry (not Jon's boss) Tom and Sal live around the corner and could walk home.

I took a few nights off but went out to dinner last night with a friend of mine, Jeremy.  He's a funny man whose company I enjoy a lot.  He was just back from Florida and ended up not drinking as he was basically detoxing after six days.  I could not figure out why he opted to meet at a wine bar for dinner then. No worries.  I tempered myself to one glass, but it was a nice wine.

Still I don't need to drink with Jeremy as his company is usually off the hook with great stories and inappropriate ones at that, even in private settings. He doesn't hold back much in a public dining area either, so you gotta be careful where you go with him.

And with him, I have found a new source of jokes.  Inappropriate ones, at that.  Well....inappropriate to some - not so much to me.

Ok.  I'm ready for bed.  A full day of work and one glass or red has made me groggy.  Yes, I'm drafting this the night before.  You know how I operate.

Email ThisBlogThis!Share to TwitterShare to FacebookShare to Pinterest
Labels: Drink

My new chemo regimen allows alcohol, but I'm such a lightweight anyway that I can barely finish one occasional glass of wine with dinner. Since I'm a strictly social drinker--I realized some time ago that it doesn't occur to me to drink when I'm alone--I don't drink all that much. But that makes for some interesting (and cheap) evenings when I have two glasses with good friends who don't mind seeing me get stupid. :D

I love the red variety of wine and have been known to open a bottle after work around 6ish and by the end of the evening put the empty in the waste bin before heading to bed.

Never really had to worry about hang overs, but I am conscious of the calories so that's what mostly curbs my drinking. I'm somewhat picky since I don't buy soda, I dislike juice and when I'm not sipping wine I'm either drinking water, tea or coffee.

White is my preference. Red is fine. But the amount this body has consumed has most definitely declined in recent years. The holidays found me nearly without any drink at all. Very very little. My nearly 50-year-old body can't take it any more.

I am inclined to lean towards green..with red hairs.

The thing about wine is - at first everyone says "cheers" but in the end it all turns into "boos".

White please (my new favorite is a a Sauvignon Blanc called Mulderbosch that I had in Orlando recently) but i'm happy to kick back a bottle of red as well. Call me!

They are the only one that had been making the most delicious vines to be drink by everyone. Their vines are having amazing taste that you are not able to forget ever in your life.