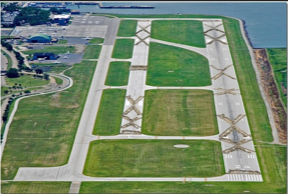 I got this pic in a FB feed the other day.

The caption read (paraphrasing, of course): someone had come into our lake front airport and dug up the runways with Xs , as Richard Daly had done in Chicago.

Cleveland, like Chicago back in the day, has valuable lake front property that can't be used by the public.

Former mayors have skirted the issue of shutting it down and developing for public use. And we have a new mayor, as the last one who opted not to address it, was in office for 16 years.  The new mayor is very open to closing Burke Lake Front, which only has small planes - and some bands use it when flying into town for performing.

Oddly, there was an article the day before this in the Plain Dealer, about how to use the land and the controversy of utilizing the acreage.

Immediately, I sent a screen capture to 710. We ended up discussing it on our evening dog walk. The implications, the felonies, the 'how are they going to the Cessnas out of their now that they can't take off?'.

Since it was FB, you'd think I'd read the comments, but since it is FB, I didn't.

Turns out, had I, I would have realized it was an April Fool's joke. And a good one. As this really did happen in Chicago a few decades back, and it has been a topic in the paper the day before, it was certainly not outside the realm of possibility.

Song by: the Who

Email ThisBlogThis!Share to TwitterShare to FacebookShare to Pinterest
Labels: Jokes

Did you see my April 1st posting? I look good in a red car. Burke is a neat airport. It is used for a great airshow, and car racing. It would be handy to have some commuter jets in and out. The locations is so convenient to downtown.