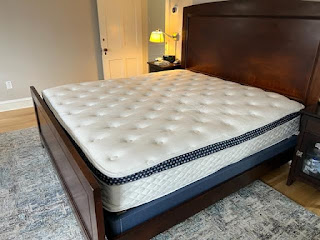 Is having three mattresses in 20-22 years excessive?
I really don't know how long they should hold up or what that average might be. It'd be nice to say we "wore it out" {wink wink}, but in reality the most activity it sees is sleep.
In the past, we have bought locally. Not just a Cleveland-based store, but they actually make the mattresses here.
Honestly, I don't know how one selects a mattress. You're in the store, for a limited amount of time. You sit on it for a minute or two and lay down it for even less time. How is that any indication of what you'll be using daily for a decade or so?
I was ok with our mattresses, even when they started to go south. 710 had a harder time adapting. So, we just got our third - and we did it a bit differently.  On-line.
Hell, I have a hard time buying clothes and shoes over the innertubes, but a bed?  This ain't Zappos - it's a lot harder to return.........................I assume.  And clearly, you can't try them out beforehand, though that never really worked for us when we did, so......what the fuck do I know?
710 did the research and came up with WinkBed. I had only really heard of Purple or Lisa, but apparently there are a lot of companies that now make beds at expand like a tube of Pillsbury Crescent Rolls when you hit them on the counter.  The rolls.....not the bed.
There are four kinds - soft to plus. We took the firm. And it still has a pillow-ish top, which you can kind of see in the image.
My problem (well, if I only had one!) was to past-middle-aged men trying to lug a rolled up 125lb mattress up a light of stairs. The box was useless and ripped just getting it in the door. I kindly lamented to 710 that this wouldn't be an issue if we had gotten a house with a first floor main suite (you can't call them 'masters' anymore).
We put in the new support, still using our existing frame, in a matter of minutes, and getting the bed out of it's seal and to expand took just a few more......and we're ready to go.
Just laying down on it seems ok. The test will be last night (see, I'm writing this in advance).  Mind you, in my last time, I was a road warrior and slept in hundreds of hotels. I think I can sleep in most any bed, so it might be a few weeks before we have a determination.
That said, 710 says that WinkBeds customer service, so far, has been A+.  And if we don't like it and choose to upgrade or switch, the cost would be just 50% of the new product price.
I just don't think I'll be able to roll-up the one we have.  Actually, I know I won't.
Song by: the Chicks
Posted by Blobby at 12:07 AM

Email ThisBlogThis!Share to TwitterShare to FacebookShare to Pinterest
Labels: Furniture

My mattress and box springs is the tallest one I’ve ever had. My dogs are intimidated by the height and find other places to Sleep .
I’ve lost track as to how old it is . It was very expensive , it’s obsolete like all the really expensive cherry furniture in the room . I’m sleeping in a dinosaur den , and Im fucking fine with that.

I have no idea how long a mattress should last or how to know one is bad or how to find a new one.
Good for your significant other to do the research !