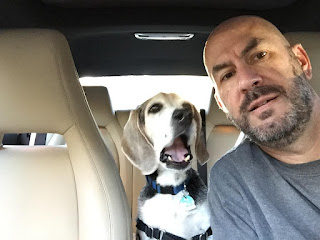 Yeah Yeah Yeah - Earth Day..........blah blah blah.
More importantly, today would have been Petey's birthday. His 20th.
I still think of him often. It's hard not to. His low-key attitude and his cuteness opened 710 up to having a dog, as he'd never had that experience.
And it was a good number of years we had with him and when we no longer had him, 710 wanted another dog.
Some point in our Petey-dom, I swore we'd never get another hound. Stubborn. Food driven. Stubborn. Slow when they want. Rebels. Flight risks. And of course, stubborn! And cute as fuck.
As it turns out, we are hound guys. I'm not sure we'd get another breed, but who knows.
The day we "lost" Petey, we ventured to a park we'd never been before. Now, we go to that park several times per month with Shep. The squirrels are not happy about this, but Shep loves it.
I do love Shep to death, but Petey will always hold a special place in my heart. He wasn't as affectionate or interactive as Shep, but he was my heart.
Earth Day indeed. Petey made Earth much better.
Song by: Kate Bush
Posted by Blobby at 12:07 AM

Dear, dear Petey. Just being reminded of him tugs at my heart-strings too, though of course nothing like the extent of yours, B. No pet lost can ever be truly replaced, let alone be superceded, by any that follows - although in your case we all still love Shep to bits! Each has his/her own brand of unforgettable unique-ness, and thank Heavens it's just so.

I referred to the beagles (at one point we had 3) as affection hounds. Attention and affection was almost as good as food...almost