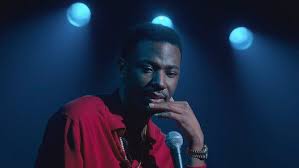 By pure coincidence, we watched an HBO "comedy" special by Jerrod Carmichael on Saturday evening.  I suppose the coincidence part is that he hosted SNL that same night - unbeknownst to us.

I put comedy in quotes for a reason. Rothaniel is a very non-traditional "stand-up" show. That's in quotes, because he sits for the entire time.

The audience laughs here and there, of course, but never LAUGHS. Nor did we. ....and that's not because he was Whitney Cummings bad....that's not laughing for a whole other reason.

Carmichael basically told stories. True stories. Personal ones. Ones I'm sure with which his family is not thrilled. But the theme of the night was 'honesty'. And he was.

I'd say, one-third of the way through, Carmichael came out to the audience.

This was all way more confessional with some humourous takes on the subjects than it was out and out comedy. You could not really see the audience, as it was seemingly filmed in a jazz club-like environment and the lights were extremely low and blue. And while humour really can span all racial boundaries, I suspect the audience was mostly, if not exclusively, black.

For that, I think there is a reason. Or reasons.

Family stories he tells could speak more specifically to the black population. There is something easier for Carmichael to translate to a familiar audience. I also think it's more difficult to do with the same audience, but part of the night - but just a small part - was a little bit about being a bit uncomfortable. For him. For them. For the TV audience too.

But I hung on every word.  And every pause.........which there were many, and not for comedic affect.

The camera angles, lighting and close-ups were really done well, which is odd to say in a comedy special, but if you see this, you'll understand what I mean. It's all about intimacy.

I did not get some audience members asking (not shouting out) questions, which Carmichael answered and incorporated into the act. I don't know if they were spoon-fed or not. My cynical side says 'yes'. But the conversation, as one sided as it was, was clean, articulate and still didn't feel at all rehearsed.

I highly suggest taking the hour or so to watch.