the Hardest Button to Button 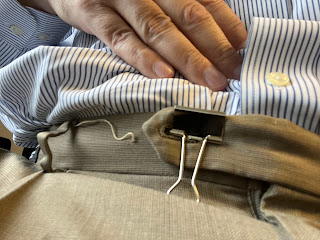 I just promised I wouldn't write about the gym - and yet here I am.

I'm still getting back into the swing of how to go the gym. It takes planning and prep and a routine. Not the lifting / cardio kind either.

No, I'm talking about: the gym bag, the locker, the system one has down and all of that.

Locker placement is crucial, but I think I have mine down. I mean, it's 05:00. I can count on one hand how many people are there at this time. And one guy carries his gym back from station to station.

But twice in three weeks, I have forgotten a belt. Bother.

Still, I thought - yes, that problematic part of my life......thought - I could make it through the day without one. It would look weird. It would feel weird, but it was manageable.

Unfortunately, the pair of pants I had selected for my work trousers (oh yes, I said 'trousers') had a loose button. I'd been playing with fire - or like when you think you can make it another 20 miles on E.  Surely I could wear these again without fixing said button.

Let it be known, I don't know how I'd fix them, as I was never taught to sew or mend. It's more likely I'd guy a new $50 pair of pants then take them somewhere to fix them for $3.  Yes, I'm cheap, but more importantly, I can be incredibly lazy.

As luck would have it - mine wore out this day of no belt.

Yes, in theory the pants still latched, but the extender piece (clearly, I have no actual names for these pants parts) would stick out, as I could not button it. And there was no time to go home, get new clothes and change before an a.m. meeting.

Yes, as you can see from the title image, I was, let's say, creative.  I McGuyver'd the hell out of my outfit., thanks to one binder clip.

If anyone noticed (though I don't leave my office much), no one said a word. It could have been an amusing anecdote, but in realty they probably just thought I was a perv.

Song by: the White Stripes

I don't know if I should cringe or giggle.

I love a man who knows when he needs metal to wrap around something to make it solid.