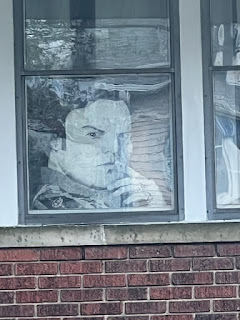 "Did you see that?", asked 710
Whatever it was, I did not, as I had my eyes on the road.
"Someone has a full blown picture of Jack White in their window!"
I pause - not only for affect, but for my follow-up response / question.
"How in the hell do you know who Jack White is?"
While I do not get a snort of derision, it is more than implied.
I'm 99% sure 710 has never listened, let along all the way through, to a song by the White Stripes or the Raconteurs. I know White has / had other bands as well, but for all the tea in China, I couldn't name one of them.
Mind you, I'm thinking all of this in my head, but not aloud. Had I, we could have cleared things up a lot sooner. Still 710 said, when we go back home, we can pass by the house again.
....and you know I did / and was going to.  And I did.
710 goes, "see...........Jack Black".   This time he was correct. SO close!
I filled him in on who Jack White is. He got my confusion.
Though none of this explains why someone has a blown-up image of Jack Black in their downstairs front window!
Song by: Three Dog Night
Posted by Blobby at 12:07 AM

The real question: why doesn't EVERYONE have a blown-up image of Jack Black in their downstairs front window??

Whose photo do you have in the window? (None)