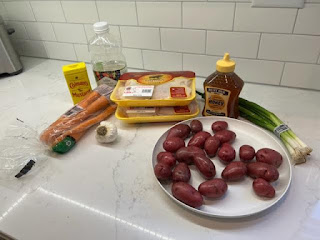 My friend Jon is not wrong when he questioned / stated that all my posts on cooking lately have revolved (mostly) around Asian style dishes.

I think (?) it's a coincidence, but on the other hand, Asian dishes are usually easy to put together. Hot mustard and honey glazed chicken was no exception.

Not tons of ingredients and it's all on a single sheet pan. Yeah, two bowls for the sauce prep, but honestly, that's about it.

I'm not big on legs, so I just did three lbs of thighs. And none of these recipes say skin-on or off, so I went bone-in, skin-on I figure it'd have more flavour.  This true and false at the same time.
I also used the Colman's, as we had it; and I couldn't find the Asian mustard at the store. And I had the lemon and forgot to use it.   Ooops. 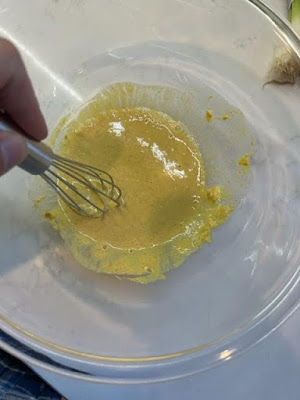 Heat oven to 425 degrees. In a large heatproof bowl, whisk mustard powder with ¼ cup very hot water until well combined; let stand 5 minutes. (The heat of the water will activate and release the mustard’s spicy flavor.) 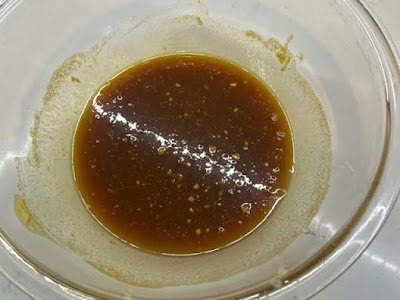 Add honey, soy sauce, garlic and 1 teaspoon salt, and whisk to combine. Reserve half of the sauce in a small bowl for basting. 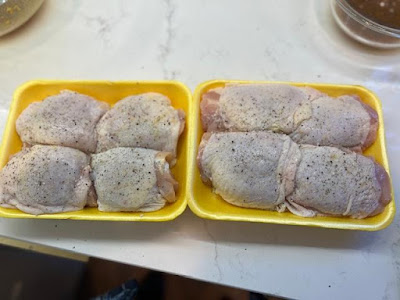 Season the chicken with salt and pepa!  No Spindarella. 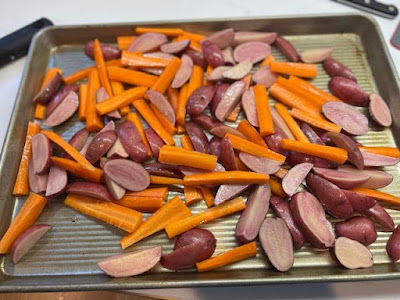 On a rimmed sheet tray, combine carrots, potatoes and 2 tablespoons of the oil. Season with salt and pepper, toss to evenly coat, and spread in an even layer 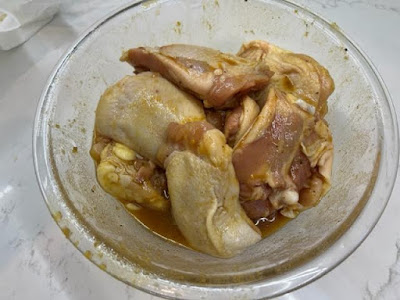 Rub chicken with the remaining 2 tablespoons oil and season with 1 teaspoon salt and ½ teaspoon black pepper. Add to the large bowl with the sauce and toss to evenly coat........ 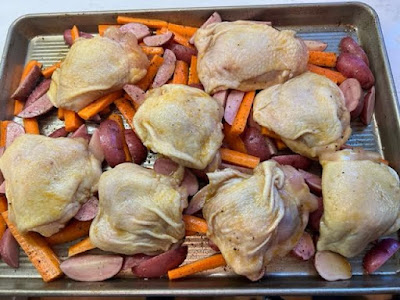 ......then arrange on top of the vegetables. 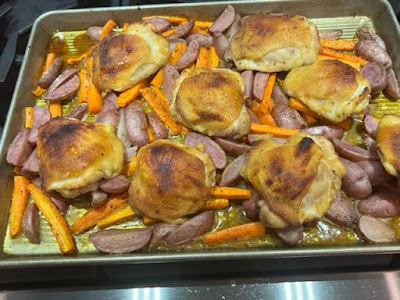 Roast until vegetables are tender and chicken is golden and cooked through, about 30 minutes. Divide chicken and vegetables among plates and baste chicken all over with the remaining sauce. Pour sheet pan juices into a small bowl and skim off any excess fat. 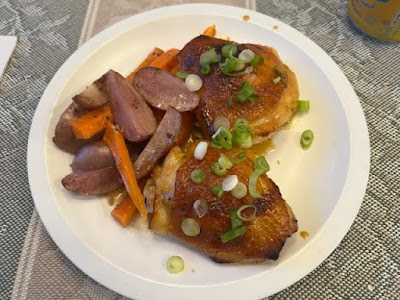 So, this worked and it didn't.  Easy to make, and it had decent flavour, but not what I was expecting. The hot mustard flavour was a bit muted. I think that's because of the skin. I don't really eat chicken skin per se, but that is where sauce ended up, not on or in the actual chicken.
I think this would be helped with either going skinless or marinating the chicken for 30-60 minutes to let it absorb.
Left overs were good and the cause that you fat-separate the next day seem to be full of mustard. I might try again, but probably won't rush to do it.
Posted by Blobby at 12:07 AM

Looks like fun, I should take more photos in the kitchen