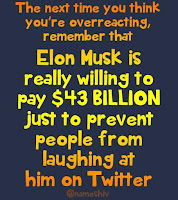 What little I used Twitter before just went to zero. I deleted my account. It's affecting single digits of people for sure and none of them tied to accounts that make money, but yeah, it's the principle of the thing.

$44 BILLION (not $43 the meme says) to buy a medium that seemingly only links people to their Only Fans sites (what? that can't just be my feed, right?)

I haven't done the math, but I'm thinking $44 BILLION (!!!!) might have kept every homeless and hungry person in the world housed, clothed and fed.

Honestly, if he had spent just half that amount on Grimes' music, she might have one (singular) halfway (I'm being generous) listenable song.

Robert Reich - g-d love him - hits the nail on the head. Twice. 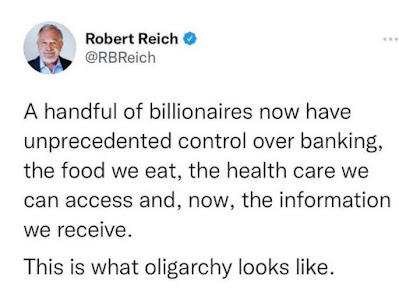 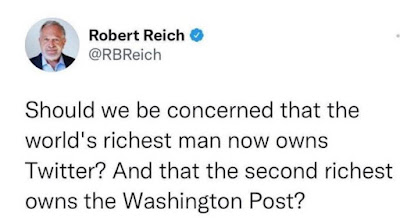 We are not the land of the free. In actuality, we never were, but it just seem so much more blatant now.
I think Bezos had a buffer period with the Post. He got it before some truly right winged buyers could snag it and sing the praises of BLOTUS. But trust me, he has an agenda too, and reporting the "news" or investigating anything isn't happening.
BTW - Reich also went on to tweet about how when he criticized Musk, he got blocked. It's only a matter of moments before he gets his account permanently banned.
I do agree with the quasi-long running memes that we should be calling U.S. billionaires "oligarchs".  Of course, the problem with that is more than half the population won't get the Russian connotation or know what the word means, and the same more than half of the population can't pronounce the word.
So in case you did miss it - and the story ran once and seemingly got squashed - Tesla is under investigation for it's California plant ostracizing black workers and being demeaned and segregated by the white ones - referring to parts of the cafeteria as 'monkey island'.   No one at the plant - with more than 45 complaints (and that was months ago) are doing a thing about it.
No wonder they're relocating to Texas. I'd say that behaviour is accepted and encouraged there, but right now, the same can be said of California.
So yes, now that you own a major communication (let's not call it news) source, you're going to direct the narrative as you see fit, and how it fits you. Black worker hating story, never to be seen again!
Oh - and you can start the countdown clock as to when BLOTUS gets his Twitter account back.  BTW, NONE of this is coincidental for the 2024 presidential run.
None of it.
Song by: Robbie Williams
Posted by Blobby at 12:07 AM

44 billion and we still take them down lol~